Robotic systems have come leaps and bounds since the introduction of electronics into mechanical designs, and yet, robotic systems still struggle with numerous tasks. One of these challenges is the creation of human-sized bipedal robots that can move like humans. Boston Dynamics have demonstrated such robots, but their motion is somewhat rigid, and they often fall over. Furthermore, robotic hands can still not match the human hand's dexterity, and this is due to the use of large motors and difficulty in developing sensors that behave like human skin.

Another challenge faced by robotic systems is miniaturisation. Trying to create a fly-sized robot that has 6 legs, wings, and cameras is impossible with current technology as cameras are too large, batteries are too heavy, and motor systems cannot be made small enough to power a pair of thin wings that can generate enough lifting force.

One striking difference between living organisms and robotics is that while robots focus on motors, living organisms use muscles. Unlike motors, a muscle can only pull, which is why two muscle pairs are often found (one to pull a joint outward and another to pull the joint inward). Muscles are also extremely energy efficient compared to electric motors (62% compared to 25%), meaning they can operate on smaller amounts of energy. Considering that a muscle has no moving mechanical parts, it makes sense that they are easier to integrate into smaller space-constrained designs.

But the challenge with muscles is that they require fine control often achieved with the use of a brain, while motors are significantly easier to drive. Furthermore, muscles need a steady supply of oxygen and nutrition, meaning that any design that plans to use organic muscles must also provide other organic systems such as a circulatory system. As such, organic muscles are never found in robotic systems, and this means that the manufacture of miniature robots is still in the realm of scientific research.

Recognising the benefits of muscles, researchers from MIT recently developed artificial muscles that can be controlled electrically while also having electroluminescent properties. To create the muscles, the team took layers of ultrathin elastomer and then integrated carbon nanotube electrodes which is then rolled into a cylinder. Applying a voltage causes the electrodes to compress, resulting in the muscle fibre pulling inwards.

The electroluminescence of the muscles was achieved by integrating zin sulphate particles into the elastomer. Thus, applying a high voltage to the muscle fibres causes them to emit light, and the researchers further demonstrated the abilities of the electroluminescent muscles by spelling the words MIT.

The artificial muscles were then used to create a small robot with four pairs of wings that provided flight capabilities. The researchers then took advantage of the light-emission capabilities of the muscles to allow for rudimentary communication and tracking via an iPhone. Additionally, using four different colours (one for each wing pair) allowed for 2mm tracking precision (close to that of state-of-the-art infrared tracking systems). 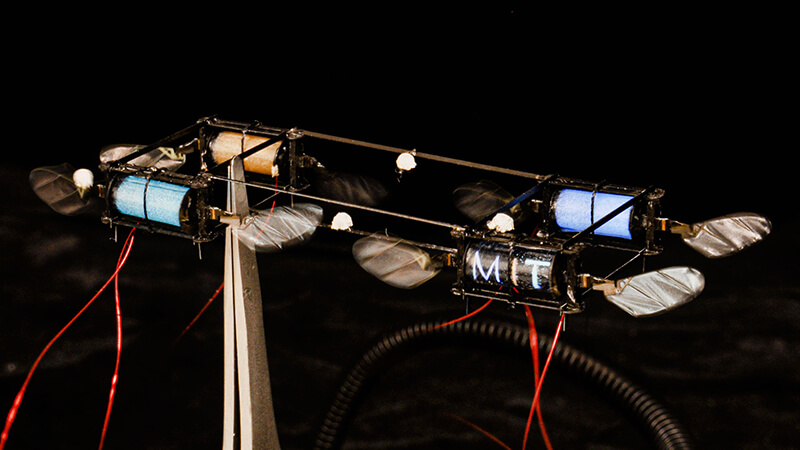 Are artificial muscles the way forward in robotics?

When creating robotic systems, it makes sense to imitate life for the simple reason that life has found efficient and reliable methods for motion. However, the challenge of improving robotic dexterity may not come from the use of motors but the lack of touch sensors and algorithms able to process large amounts of data in real-time.

As such, larger future robotic systems may be reliant not on artificial muscles but on artificial skin with thousands of touch and pressure sensors. Processing this information would require the use of artificial networks integrated into controllers, and thus it may be that robotics that mimic life require a brain more than anything else.

There is no doubt that artificial muscles are the way forward in microelectronics, but they could also be the answer for larger robots trying to mimic the human body.

Car hacking epidemic. It’s a CAN do problem

What's all this driver distraction control gizmology about anyhow?