Algae used to power ARM microcontroller for a year

Recently, researchers from the University of Cambridge demonstrated an algae-powered battery able to produce electricity for over a year. What are biobatteries, what did the researchers demonstrate, and how could such power sources be useful for remote IoT applications?

One goal that researchers continue to strive for when it comes to power is the “perfect battery”. Such a battery would be able to store tremendous amounts of power in an extremely small space while being inherently safe. This battery would also be fully rechargeable an infinite number of times without any degradation, provide huge amounts of instantaneous current, charge instantly, and best of all, be entirely environmentally friendly and recyclable. Now, the real world is unforgiving, unpredictable, and ignorant of one’s feelings, and this means that this so-called “perfect battery” will likely never exist. But this hasn’t stopped researchers from looking for new technologies that can provide their own niche.

For example, Lithium-Ion has become the dominant battery technology in portable devices thanks to its high energy density and high instantaneous current capabilities. Lead-acid batteries find their use in vehicles needing extremely large currents while keeping costs low. Supercapacitors have even found themselves in battery applications for devices needing to store charge over time (such as an energy harvester) and then release the energy in an extremely short time to power microcontrollers, sensors, and network modems.

But one technology that has taken battery technology to a truly bizarre field is bio-batteries. Simply put, bio-batteries use biological matter to store energy that, once reacted, can produce electricity. A typical example of a biochemical used to store energy is glucose, and enzymes can be used to break down the glucose to generate heat. Some enzymes can even directly turn glucose into electricity, and researchers have explored such power sources for skin-worn sensors.

Researchers develop an algae battery able to power a microcontroller

Recently, researchers from the University of Cambridge announced the development of an algae battery that was able to constantly power a microcontroller for an entire year. While crude in design, the battery uses non-toxic algae called Synechocystis, which generates a small electric charge when exposed to light. The use of aluminium electrodes allows the algae to transfer their charge to an external circuit, and the battery does not require additional nutrition to work during this period.

The microcontroller chosen by the researchers was an ARM Cortex M0+ due to its low power requirements. To prove the battery’s ability, the experimental setup was placed in a domestic semi-outdoor area with access to natural light, and the AA sized battery was able to keep the microcontroller operational. Furthermore, the battery is constructed from inexpensive common materials making it extremely easy to refurbish, recycle, and manufacture. Additionally, the lack of rare minerals or exotic compounds makes it far more environmentally friendly to manufacture compared to other battery technologies. 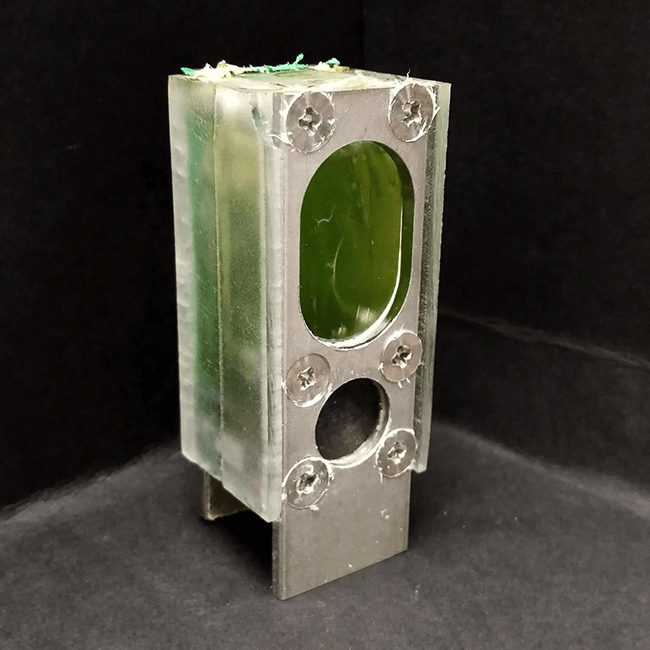 How could such power sources be ideal for remote IoT applications?

While the battery has proven practical for low-power microcontrollers, it will unlikely ever be an energy source that would power vehicles or homes. The amount of energy produced by algae is minimal, and few battery improvements would make algae viable for high-current applications.

However, one area that could benefit from algae batteries would be IoT devices in highly remote areas. When it comes to environmental monitoring, sending researchers far out into the wilderness is expensive and time-consuming. Furthermore, the amount of data gathered by researchers in these locations is severely limited, which can make environmental monitoring very challenging.

One solution is to install IoT sensors that can communicate over a mesh network and then stream their collected data to a server, but this comes with its own problems. For one, there are no sources of power in the wilderness except for whatever a device can generate. This usually means that each sensor requires a solar panel, wind turbine, and energy storage unit. An alternative method is to use a battery that can be changed whenever researchers make inspection visits, but this has its own problems, including the weight of batteries, how long they will last, and accessibility.

If such sensors could use algae batteries, the only requirement would be for the battery to have access to natural light during the day. A small onboard supercapacitor can be used as a battery during the night, and the IoT sensor can spend most of its time in a deep sleep state, only waking up to make a few measurements and transmit the data. Additionally, if the device fails and becomes lost to the environment, the battery won’t cause environmental damage from leaked chemicals.

The technology presented by the Cambridge researcher shows how IoT devices could be powered by environmentally friendly power sources that can continually work in the presence of light. Whether such batteries will become a major technology in this field is still yet to be seen, but considering that they are easy to manufacture and are reasonably reliable, they just may catch on.