Capacitors are a fundamental component in electronics and are used to store electric charges. Their ability to store charge also allows them to be used as filters for blocking AC and DC (depending on the configuration) and can also be used in timing circuits. In fact, capacitors are so important in electronics that just about every practical circuit will have at least one capacitor.

While supercapacitors show great promise, they are substantial in size (compared to batteries), making replacing batteries impossible. However, a team of researchers from the Chalmers University of Technology have developed a new technique for creating micro-supercapacitors using standard manufacturing processes.

The idea that the researchers explored was to integrate supercapacitor technology onto semiconductor-like wafers, and these miniature devices can then be connected up. To create the devices, the researchers turned to spin coating to develop ultra-thin layers of electrodes and dielectrics that can help reduce the thickness of the capacitors. The reduction in thickness also increases the capacitance, thereby improving the performance of the devices.

The researchers also explored the use of alkylamine chains and reduced graphene oxide to further increase the energy storage capabilities of the microdevices. The ability to create the supercapacitors using standard CMOS practices also allows the devices to be directly integrated into silicon wafers holding processors and +other circuity. This could lead to a future of devices that incorporate their own power storage technology. 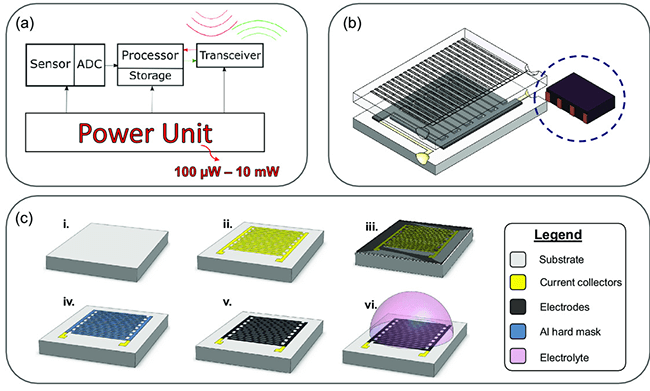 The researchers have demonstrated the ability to integrate power storage technology right into the die of a semiconductor, which could prove invaluable for future mobile devices. The use of wafer-scale supercapacitors could also lead to the creation of ultra-high-density batteries that can be charged considerably faster than current battery technologies in use. The ability to charge quickly also makes supercapacitors ideal for regenerative braking as the energy produced from braking would easily be trapped with minimal losses.

However, supercapacitors still face challenges that make it hard to integrate practically. The first is that for their size, technologies such as lithium-ion are better at releasing energy over long periods compared to supercapacitors. This is ideal for use in vehicles where power is required over the entire journey and not in a matter of seconds. The second is the price difference, with supercapacitors being anywhere between 10 to 40 times more expensive than lithium-ion per watt-hour.

Overall, supercapacitors have a long way to go, but they show real promise in the field of energy storage. Supercapacitors will likely be used in parallel with other battery technologies so that a device can get the best of both worlds.