Recently, researchers from TU/e have been able to miniaturise a near-infrared sensor that can take accurate chemical readings from food and liquids. What challenges do spectrometers present, what did the researchers create, and how could it be used in the future?

What challenges do spectrometers present?

Spectrometers are fascinating pieces of technology, yet their operation principle is somewhat trivial.

Simply put, each compound has its own unique spectrum, meaning that it will absorb and emit specific wavelengths of light. If white light is shone onto a compound, and the resulting reflected light is separated (with a prism, for example), dark lines appear in the spectrum, and this pattern is unique to that compound.

Similarly, compounds can also emit light, and the spectrum of this light will contain bright lines at frequencies which the compound emits. This is also unique to the compound, and thus the compound can be identified by simply seeing its spectrum.

This technique is often used in chemistry where the contents of an unknown solution need to be determined, but it can also be used in astronomy to identify the contents of distant stars. Furthermore, spectrometers can be used in the food industry to identify the nutritional value of foods if used in the near-infrared spectrum and determine the health of animals from which food is sourced. Milk is a typical example of a food that can be examined with near-infrared spectrometers to determine its nutrition and the health of the cow.

However, spectrometers face multiple challenges that hinder their use in applications. The first is that they are complex devices that require specialists to be trained in and interpret the results. The second challenge is that they are expensive, limiting their use to research labs and high-tech industries.

The third challenge is their reactively large size, making them impractical to install in mobile and plant sites. Such a second could be used in a static production facility, but incorporating one in a farm setting is an impossibility. 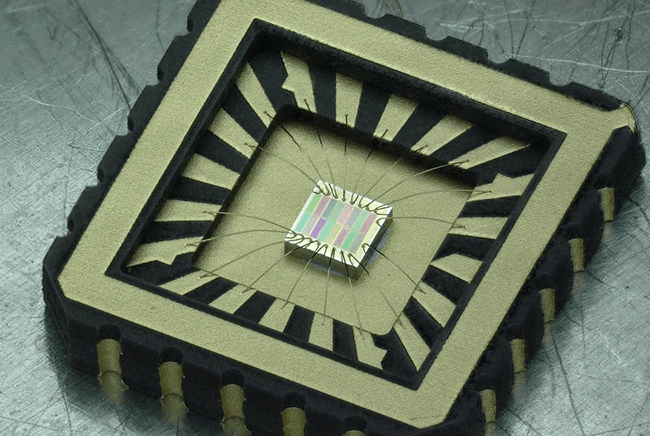 The sensor design consists of multiple layers of silver, gold, and InGaAs, all sat on top of a silicon substrate. While typical light sensors take physical sensor readings and pass them through an optical fingerprint to recreate the spectrum, the new sensor does away with this spectrum reconstruction, which helps simplify the sensor's design.

Proving the sensor's capability was done by analysing the nutritional value of different foods, including milk. The resulting experiments showed levels of accuracy that would allow for the sensor to be used in modern commercial applications.

"We used the sensor to measure the nutritional properties of many materials, including milk. Our sensor provided comparable accuracy in predicting fat content in milk as conventional spectrometers. And then we used the sensor to classify different types of plastic."

How could such a sensor be used in the future?

The ability to analyse materials and determine their composition using a miniature sensor could open smart devices to a new ear of environmental awareness. If integrated into a smartphone or smartwatch, users could identify the quality of food and drinks and determine if the drink is safe to be consumed and what nutritional value they would get.

Users could also utilise the sensor to correctly identify medications that may have been mixed up. While medication generally has identification numbers and colour coding, pills can often look alike, especially those with poor vision. Thus, near-infrared sensors could be beneficial for those who are blind and require help identifying consumables.

The sensor developed by the researchers has been stated to be ready for commercialisation. If the hype around this sensor is justified, then expect to see near-infrared sensors in the near future.

Hydrogen for heating – How can hydrogen help the renewables industry?

How wireless modules bring the Internet of Things to life