Recently, researchers have developed a camera whose size measures just 0.5mm square. What challenges do small cameras face, how did the researchers achieve this, and what could it be used for?

What challenges do small cameras face?

When designing an electronic camera, many factors need to be considered. One such factor is the total area of the sensor; larger sensors are more sensitive to light while smaller sensors are generally cheaper and faster. Another factor is pixel size; too small of a pixel size can make it difficult to detect light if the wavelength of the incoming light is close to the size of the sensor.

But no matter if a camera is big or small, one of the most significant challenges researchers and engineers face is the collection of light itself. Sensor technology has come a long way and is very well understood, but trying to gather light and focus that light onto a sensor is a whole science in its own right (optics).

Large cameras such as those found in astronomy face challenges with lens design due to the sheer size of the lens. High-quality lenses are made from specialised glass. These lenses need to be ground and polished to a high degree of quality; otherwise, the resulting images will not be usable.

Trying to make small cameras also faces challenges with lenses due to fundamental physical limits. For example, small lenses have an extremely small light capture area, making it challenging to produce a signal. Another problem with small lenses is that they have very low f-stop values, meaning an extremely narrow depth of field. Long story short, small lenses produce sharp images of objects at a very specific distance; any variation in this distance creates a blurry image.

But creating small lenses for cameras approaching the micron-scale also suffer from problems associated with the fundamental properties of light. For example, features in a lens whose size is close to the photon's wavelength will result in diffraction, and this diffraction can further cause interference patterns.

Researchers create a micro camera with the help of AI

Researchers from Princeton and the University of Washington recently published a paper in Nature on a camera whose lens size was only 0.5mm square and distance from the sensor is 1mm. Under normal circumstances, the image obtained by the new camera is completely unrecognisable due to the behaviour of light at the micro-level, but combining the resulting sensor data with AI allowed researchers to reconstruct the image.

The first achievement by the researchers was to create a lens whose thickness of only 500µm. The short focal distance of the lens (being only 1mm) means that the camera can be made extremely compact (far more compact than even the smallest mobile phone cameras). However, the lens is no ordinary curved piece of material; researchers instead etched micropillars into a piece of Si3N4 (silicon nitride) that help to guide and manipulate light as it enters the lens material.

The second achievement by the researchers was to take the resulting image (which looks more like random diffraction patterns) and then train an AI to determine how to reconstruct the original image. The resulting algorithm designed by the researchers can generate images whose FOV and quality exceed all other micro cameras of similar size to date. Furthermore, the setup can provide full-colour photos covering photon wavelengths from 400nm to 700nm. 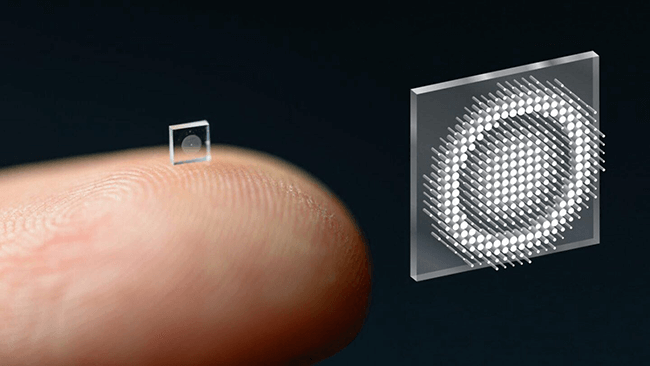 What applications would such small cameras have?

The ability to take large photos with such accuracy from a micron-sized camera would have many potential applications.

One primary application for small cameras would be internal body cameras that could easily travel around organs without causing distress to the patient. Doctors would be able to get high-quality photos while putting very little stress on internal organs and bodily functions, leading to better diagnosis. Current cameras used by ingestible pills are bulky and provide very shallow depths of field by comparison.

Another potential application for extremely small cameras would be industrial processes needing to obtain high-resolution images of produced parts looking for flaws and imperfections. Large cameras can provide this, but smaller cameras can be easier to operate, provide better close-up images, and be less intrusive during the production process.

Smartphone cameras could also utilise such technology by completely eliminating the need for multiple bulky cameras and lenses. But this could be taken further by covering the entire backside of a smartphone with micro cameras to allow for highly complex operations. As the camera lens is only 500µm thick, there would be virtually no added weight to the camera while simultaneously allowing for an essentially flat design. Smaller cameras also enable smartphones to be made much thinner than they currently are.

Overall, what the researchers have presented here is a genuine advancement in technology that will undoubtedly be used in the future. But what the research also shows is how important AI is in developing advanced solutions that are too complicated to hard code.

Government unplugged over electric vehicles and flat on battery technologies