Recently, Xiaomi announced the production of their Cyberdog, which looks an awful lot like Boston Dynamics Spot. What features does the new Cyberdog have, how does it compare to Boston Dynamics, and is it a cheap imitation of Boston dynamics?

What is the Xiaomi Cyberdog?

Recently, Xiaomi announced its first range of robotic products called “Cyberdog”, a four-legged robot that can move around and perform a range of different programmable actions. The design is clearly inspired by the Boston Dynamics robot’ Spot’ and features an almost identical movement pattern, camera positions, and general design.

With regards to electronics, the Cyberdog utilises an Nvidia Jetson Xavier NX AI mobile supercomputer that provides 21 TOPS of computation. This module controls the Cyberdog to provide intelligent movement, stabilisation, and reactive behaviour. The onboard memory used to store program information is an industrial-grade 128GB SSD, and various I/O ports allow for customising hardware added to the Cyberdog.

The Cyberdog also integrates a wide range of various sensors and cameras, including an array of 6 microphones for directional hearing, at least 8 cameras on the face, touch sensors, GPS, and ultra-wide angle cameras. 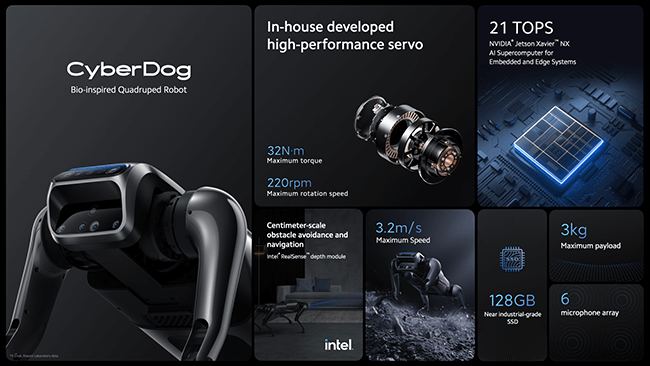 Anyone who follows Boston Dynamics will immediately recognise the similarities between Spot and Cyberdog. To start, they both use an almost identical leg configuration and construction method with a rectangular body, flat front face, and rear-facing knees. The two robots also move in the same way (i.e. jogging on the Spot when performing small moves) and have both demonstrated dog-like behaviours.

However, the Xiaomi Cyberdog can move at almost twice the speed of Spot (3.2m/s as opposed to Spot’s 1.6m/s), and Cyberdog is fitted with far more sensors and cameras. Another significant difference is the selling price for both robots; Xiaomi sells the Cyberdog at just $2,700 per unit while Spot sells for $75,000.

Another difference between the two designs is that Spot is closed-source hardware and software while Cyberdog is open-source. This means that Cyberdog is more open to development from both a software and hardware perspective.

Is Cyberdog an example of unfair imitation or helpful progress?

From face value, it would seem that what Xiaomi is doing is outright unfair. Boston Dynamics has invested millions of dollars into the research and development of robotic systems, and Xiaomi, at the last minute, swoops in and uses their design to create a cheaper product.

Xiaomi selling cheap units will not only hurt Boston Dynamics ability to recover R&D costs but could see their business shut down entirely. This has a secondary effect of halting research and development in the future as Boston Dynamics, arguably at the forefront of robotic design, would no longer be able to make advancements.

However, Boston Dynamics appear to have made no comments surrounding the development and release of the Xiaomi Cyberdog. If the Spot design was patented with an intention for commercialisation, one would think that Boston Dynamics would be getting an army of lawyers to shut down Xiaomi’s latest product range.

If this is the case, Boston Dynamics may actually be in favour of Xiaomi selling Spot look-alikes. Xiaomi proving that the design can be sold may help Boston Dynamics move their attention to more important research such as bipedal robots. In the case of the Cyberdog, Xiaomi making their design open-source would allow the public to develop the platform, and this data could be fed back to Boston Dynamics to further improve their research.

4G, Fibre, or Copper: Which Will You Be Using Next Year?