How has the energy market in the UK changed over the years?

The UK energy market has seen a significant shift away from fossil fuels to renewables in the last decade as an attempt to reduce CO2 emissions. Energy sources such as coal have been just about eliminated, cleaner fossil fuels such as natural gas have stepped into coals place, and renewable energies are growing exponentially.

Of the 47% renewable energy sources, wind makes up 60% of all renewable energy sources, followed by bioenergy, hydro, and solar in descending order. However, it should be recognized that this figure is for energy generated for the national grid instead of all power generated. This means that homes with their own solar panels would have generated electricity for their own consumption, thereby reducing the demand on the grid.

Overall, the UK energy market continues to increase its dependency on renewable energies. Despite negative coverage of the UK government not taking enough action, data suggests that this is not the case, with 2021 being the highest year for renewable energy production to date. 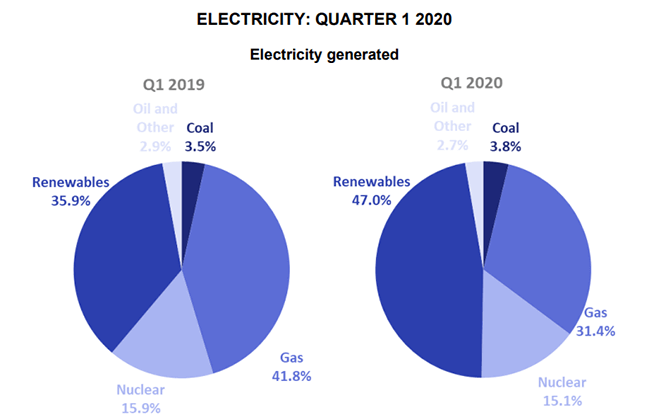 In a bid to continue the increase in the use of renewable energies, the UK Government has recently announced £265m in subsidies for renewable energies. The subsidies will help fund and develop ongoing projects to install new wind farms (both onshore and offshore), solar panel installations, and alternative energy sources.

Of the £265m, £200m will be funding offshore windfarms as this is currently the largest contributor to energy production in the UK (for renewables). £55m will be provided to emerging technologies, including tidal, and the remainder will be used to help onshore projects, including wind and solar.

It should be noted that the recent COVID-19 pandemic has seen a significant strain on the economy in general. There has been some complaint regarding the size of the subsidies being lower than the 2014-2016 years. Industry experts such as Dan McGrail (CEO of Renewable UK) have said that the subsidies could see private investments in the UK energy sector with a value of over £20bn. Such investment helps increase the overall supply of renewable energies and helps increase jobs and education possibilities in the energy sector.

What challenges do renewable energies face?

While the push to increase the usage of renewable energies is good for the climate and environment overall, it presents engineers with a major challenge; energy reliability. If all non-renewable energies disappeared today, they could easily be replaced with renewable sources as the raw material and resources exist. However, energy reliability couldn’t be adequately managed, whereby energy generated by renewables matches demand.

Unlike gas or coal power stations, renewable energies only generate power when their power source is available. As the sun does not always shine, and the wind is not constantly blowing, renewable energies cannot always match the demand on the grid. If the demand from the grid is too great, then control systems can fail to cause the electrical grid to shut down (for safety reasons).

To overcome this, energy storage technologies need to be developed that can store renewable energy when it’s being produced in excess and then deliver this power to the grid when renewable energy production is at its lowest. For example, a large grid battery can store energy from solar panels during the day, where energy demand may be at its lowest. The grid battery can then feed this stored energy back into the grid at night when the solar panels can no longer provide power, but demand is at its greatest.

However, energy storage technologies have a long way to go. Unless commercial energy storage solutions can be developed (whether it’s a battery, pumped hydro, or compressed air), renewable energy will still rely on gas and other reliable power sources.

The Main Diagnostic Tests Being Used to Fight the Coronavirus