Recently, researchers have developed a pressure sensor that demonstrates a linear relationship while having a wide range and high sensitivity. Why are flexible touch sensors important, what has the research team developed, and what makes the design unique?

Flexible sensors are exactly what they are called; flexible sensors. Creating flexible electronics is a challenge for researchers as electronics require a range of materials, many of which are not flexible. For example, conductors (such as wires) are usually made from metal, and metal is not known to be flexible. Another example would be semiconductors used in making transistors and other active components.

Flexible electronics, in general, are becoming more important as the development of such components can allow for the creation of flexible designs which can morph to uneven surfaces as well as organic surface. While wearable electronics do currently exist, they are more akin to a non-wearable device with a strap to hold it in place (such as a smartwatch).

But flexible electronics can also be highly ideal for use in robotic systems. The human hand is a truly remarkable design as it not only has the strength to lift heavy objects but also be able to apply different pressures depending on the object being lifted. This is greatly aided with touch as touch allows a human to determine how much force is needed to hold the object without breaking it. For a robotic system to have the same dexterity, it requires a sense of touch.

Developing touch sensors for robotic systems presents a few challenges. The first is choosing the sensor technology as each technology has its own advantages and disadvantages. For example, a capacitive sensor may provide the sensitivity needed, but a piezoresistive element may provide the pressure range required.

The second challenge is the non-linearity of a sensor. While many sensors provide linear outputs, this may be only for a defined range. A system that is required to detect and handle a wide range of objects (from an egg to a 20KG weight), may not be possible using single touch technology.

The third challenge is that most options on the market (if not all) are all based on non-flexible technologies. As such, touch sensors cannot morph around an object or provide a large range of flexibility. Non-flexible sensors also suffer from a limited pressure rating range as previously stated.

Recently, researchers from China have developed a flexible capacitive pressure sensor that exhibits both a wide pressure range and sensitivity. The new technology is based on using a combination of a capacitive structure with micropillars that resemble a toothbrush.

Each pillar is separated by less than 25um, and these flexible pillars are coated in gold. The dielectric layer of the sensor is made using an ionic gel, and the top layer is a gold-coated flexible layer. The resulting electrical characteristics demonstrate a three-stage output with each stage exhibiting a linear relationship. 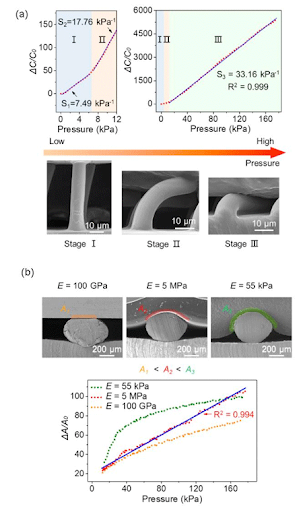 Applications for the Flexible Design

The researchers did not stop at a simple demonstration of the sensor technology, they also implemented the technology into a robotic hand. The use of the technology showed the sensor readings from the hand holding onto a tennis ball and a corresponding graphic. The resulting data and image show a setup that looks extremely similar to a human hand holding a tennis ball with pressure lines that would match a handprint. Since mimicking biology is often the best route for robotics, the demonstration shows that the new flexible sensors could present a viable option for life-like feedback systems in robotics.

The pressure sensor was also used in a simple radial artery detection setup. The sensor, placed around the wrist, was then put under different pressures. Despite the many cycles and range of pressures, the output was stable and clear. 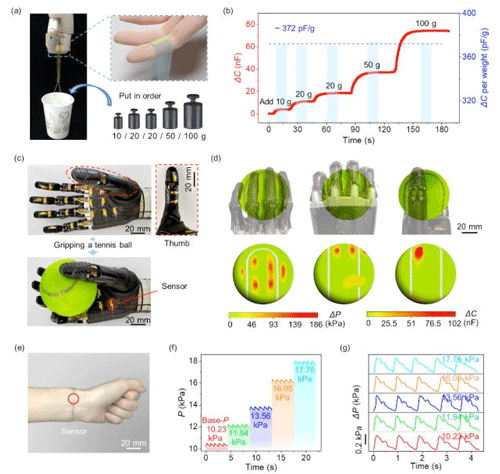 Storing Information and Data with DNA