Siren, a medical company, have produced a sock that can help to prevent diabetic Neuropathy by detecting temperature changes in real-time. What implications will this technology have and how can wearable technology be expanded?

While diabetes is a disease that affects a minority of the population, it is still able to wreak havoc in peoples lives. If caught early, type 2 diabetes can be managed with a control diet, exercise, and frequent medical checks. However, some scenarios can arise that may be hard to detect before permeant damage is done with Diabetic Neuropathy being one example. Diabetic Neuropathy is when nerve endings in a patient become damaged to the point where either pain or numbness is experienced. This condition is particularly dangerous when in feet as the damage caused by resulting ulcers can require amputation. The US alone has to perform over 100,000 amputations a year as a result of Diabetic Neuropathy and costs the medical field over $43 billion.

Detecting the presence of damage to feet is often done during a check-up by monitoring temperature. However, since ulcers can form in a matter of days (faster than the period between check-ups), permanent damage can already be done. To solve this, a medical company have developed a smart solution that potentially opens the door to a whole range of applications that could change the way we view medical technology.

Siren, a medical company, have developed wearable socks with integrated temperature sensors that can monitor the temperature of feet in multiple locations. The idea behind the technology is to catch the formations of ulcers and inflammation before they become a problem. The socks wireless connects to a mobile app that tracks temperature changes as well as other metadata such as the number of steps taken. The socks, designed to last six months, provide doctors with an invaluable tool and improves the checking of foot damage by 87% (when compared to visual checks alone). But to continue the commercialisation of the wearable technology, Siren has raised $11.8 million, enabling them to take their medical tech further.

One of the most significant issues with COVID-19 is the need to isolate and retain social distancing to prevent the spread of the virus. This problem is further amplified when considering that diabetic patients are in the vulnerable category to the virus (i.e. higher mortality rates). The socks produced by Siren not only give patients the ability to monitor their health; it also allows doctors to see data from patients remotely and can continue providing care. 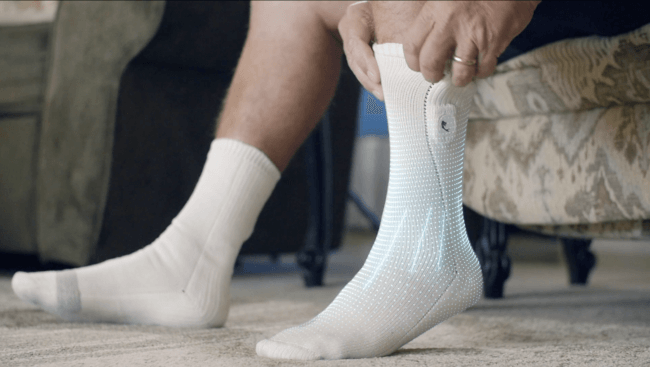 Potential use for wearables

The ability to integrate sensors into comfortable clothing is a significant step in the wearable technology field. While this development allows for the possibility to implement convenience devices into everyday garments (such as smart devices, assistants, etc.), the medical field may be the one that benefits the most. One possible application that comes to mind is the possibility of early cancer detection. While more evidence is required, there is data that suggests some cancers such as breast cancer can produce their thermal pattern—spotted by a tourist when visiting a site in Edinburgh who noticed that their thermal image had a patch on their chest. After visiting the doctor, the patient was confirmed to have cancer and has since successfully recovered. This leads to the possibility that a bra with integrated temperature sensors could detect breast cancer early on. Temperature can also be used to identify inflammation which is often a sign of infection. Of course, the temperature is not the only sensor that could be deployed; moisture sensors could be used to look for sweat concentration while strain sensors could be used to detect movement and heart rate. This could lead to people’s diagnoses being based on changes in their data as opposed to the raw data itself.

Wearable technology has a long way to go before becoming mainstream, but the medical field will bring the most demand. The ability to track patient data and monitor health over long periods will provide doctors with information that they would often have to perform large scale studies to obtain. Better yet, this data would not only be personal but allow future machine learning systems to provide better diagnoses for each patient.

Could robots make a better Brexit decision than our MP's?