Researchers have created an electronic skin (e-skin) that can detect gestures, provide illuminated feedback, all while not requiring an external power supply. This e-skin hails from a set of new wearable technology innovations. How does this wearable technology work, and why is it important that it requires no input power?

What are wearable devices?

Wearable electronics are electronic products that can be worn by a user. Such devices that currently exist on the market that are labelled as wearable include smartwatches and health bands that monitor heart rate, oxygen levels, and respiration. However, calling these devices wearables is somewhat of a stretch as they are often large and bulky, being potentially uncomfortable to wear. An analogy for this would be a portable computer; the first mobile computers were technically portable, but would often be incredibly heavy and require a mains power supply. A genuinely wearable device would not only be comfortable to wear but would also flex with the organic nature of the human body. For example, a t-shirt is a piece of clothing that moves with the body while also being comfortable to wear.

Wearable electronics face many challenges due to the nature of electronic components; most parts of an electronic device are inherently rigid and inflexible. From resistors to transistors, each device is generally made from materials such as silicon or metal which prefer not to flex. The second problem that wearable devices face is where they get their power from. Again, most power sources are not flexible meaning that a user is required to carry the power supply with them. While ultra-thin batteries can be manufactured, the reduction in the size of a battery results in a decrease in its capacity. Thus, wearable electronics are required to consume as little power as possible to be able to run off low-capacity power supplies.

For a human to interact with circuitry, a conversion stage is required that turns electrical signals from a machine into visual or audio signals for humans. The same is true in reverse; an electromechanical step is needed to convert mechanical signals from a human into electrical signals that a machine can understand. This stage consumes power, and the creation of a flexible HMI suitable for wearable electronics is currently lacking. To help solve this, a team of researchers have developed a flexible e-skin that not only provides the user with a touch interface but also provides luminescent feedback. 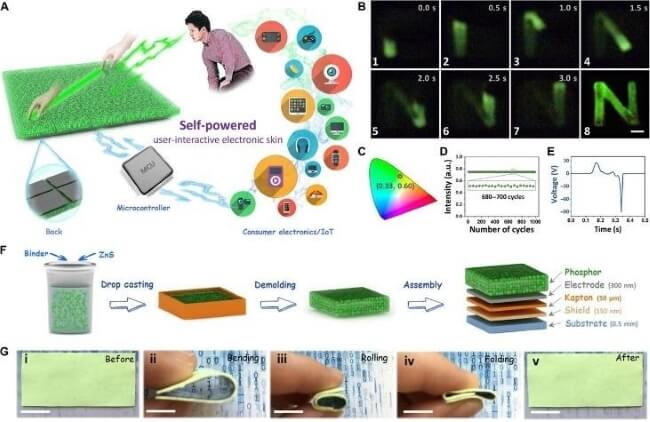 The low-power wearable device, called SUE-skin, is a multi-layered material including a phosphor layer, electrode, Kapton, shield, and substrate that is quickly produced using drop-casting. When the skin is pressed, the mechanoluminescent properties of the skin provides light at the point of contact without the need for an external power supply. The e-skin also can detect points of touch, and the team used this ability with a microcontroller to recognise up to 156 different gestures. One of the significant advantages of the SUE-skin developed by the team is the low amount of force needed to produce light; other mechanoluminescent materials require pressures higher than 100kPa, which is far too great for humans. This skin, however, operates with pressures as low as 20kPa, making it ideal for use in HMIs in wearable electronics. 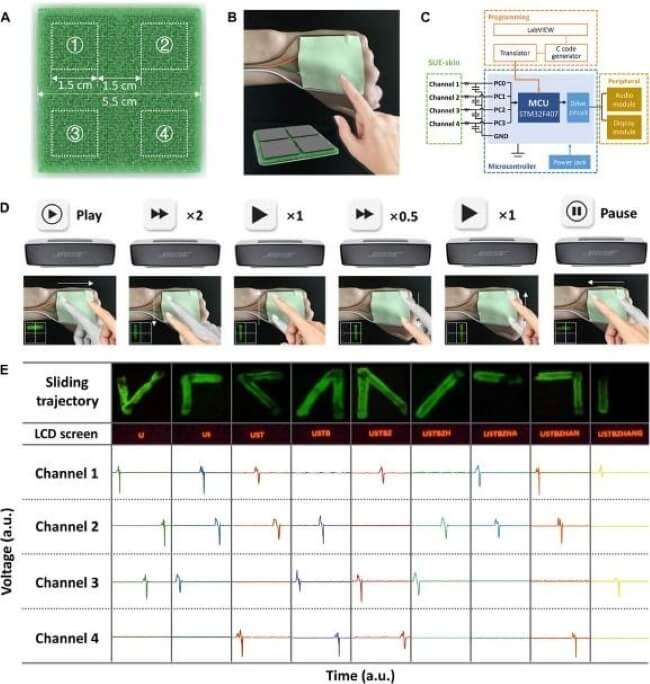 Such technology has applications that go beyond wearable devices. For one, the robotic prosthesis could greatly benefit with the use of a touch sensor that can recognise a wide range of gestures. Thus, a user could pre-program functions such as grab and release with the SUE-skin system without the need for a worn power supply. The simplicity of using the SUE-skin system (requiring a handful of ADC channels on an STM32 microcontroller), demonstrates that wearable technologies are not only viable but also simple to integrate into consumer devices ranging from fashion to fitness and health wearables.