Batteries are ubiquitous in modern-day technologies, and without their developments over the last few decades, we would not have achieved such technological advances – especially in handheld and portable devices. While there are many different batteries out there, the lithium-ion (Li-ion) battery is the only rechargeable battery that is used on a large scale and this is due to its ease of fabrication, good (but not excellent) properties, long usable lifetime, being relatively safe and the ability to be produced at scale.

There are, however, many other batteries out there which have much higher theoretical energy densities than Li-ion batteries. This means that there are batteries with the potential to store and release a lot more energy than the status quo, and the commercialisation of these batteries could lead to batteries with much longer usable lifetimes than we currently have. Of all the rechargeable batteries (outside of the conventional Li-ion), lithium-sulphur (Li-S) batteries show the most promise. So, why haven’t we seen them in widespread use yet? This fundamentally comes down to that there are some key mechanistic issues with Li-S batteries that need to be overcome on a large scale, but progress is currently being made in both academic and industry sectors.

The Issues of Li-S Batteries

Every technology has a sticking point, and for Li-S batteries, it is the formation of polysulphide ions within the battery that suppresses the efficiency and usable lifetime of the battery. This is commonly known as the ‘polysulphide shuttle’.

While this is the fundamental mechanism that enables Li-S batteries to function, the release of the different ions into the surrounding electrolyte is a key issue as the sulphur ions absorb lithium ions, causing polysulphide molecules to leak from the cathode (while some stay on the surface of the cathode), degrading it in the process. The key difference between the two polysulphide ion formations is that the ones that leak into the electrolyte don’t completely break down into elements (which could move back to their respective electrodes) when the battery has finished its cycles, and this lowers the long-term efficiency and stability of the battery. 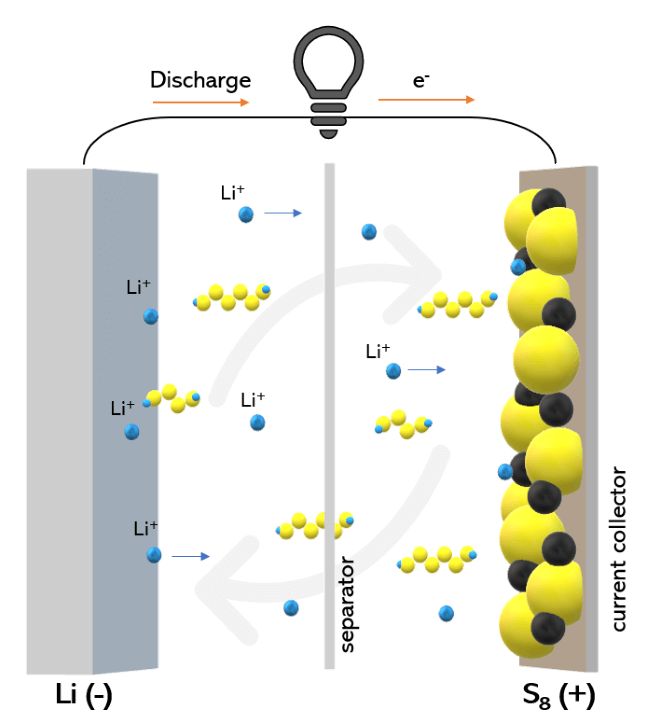 The polysulphide ions are soluble in the electrolyte and this enables them to ‘shuttle’ between the two electrodes. In this shuttling process, the molecular ions become reduced in the anode into shorter polysulphide chains before moving to the cathode where they become longer chains again. Because they continually shuttle between the electrodes, they never change back into a neutral state (which the surface polysulphide ions do) and become useless as far as the charging and discharging mechanisms are concerned, while simultaneously reducing the number of ions which are available for facilitating the charge and discharge cycles of the battery.

As it stands, a lot of the efforts being made to counteract the polysulphide shuttle include changing and tuning the electrolyte, so it makes it harder for these molecules to form in the electrolyte. If these issues can be removed completely, then it’s likely we will see more use of Li-S batteries in a commercial setting. Luckily, advances are being made at the fundamental science level (academia) and in the industry to improve these batteries.

It would be impossible to document all the research coming out of academia due to the sheer volume that is produced year on year. However, if we focus in one of the most recent pieces of research, published in ACS Nano by He et al at the end of 2019, as it showcases some very promising advances for suppressing the polysulphide shuttle over long time periods.

The team simply added a small amount (4%) of the molecule glutamate – a small organic molecule more commonly associated as a neurotransmitter within our bodies – into one of the more common Li-S electrolytes, the lithium salt of bis(trifluoromethanesulfonyl) imide (LiTFSI). Such a small change has meant that the Li-S batteries can function over longer cycle times without polysulphide build-up. This is due to the glutamate having a repulsive effect on the polysulphide ions, which makes it less likely that polysulphide ions will leak from the cathode into the electrolyte.

While a lot of work has been performed at the academic level, it was only last year (2019) that Li-S were starting to be manufactured by the industry on a large scale [2,3]. The UK-based company, Oxis Energy, is the first in the world to try and produce Li-S on such a scale and have focused on preventing the ions from leaking in the first place, rather than being suppressed by the electrolyte. Rather than a pure sulphur cathode, it is a hybrid material composed of carbon, sulphur and a polymer binder which has an improved efficiency over other Li-S electrodes, and they are protected by a ceramic coating (a passivation layer) that prevents the cathode from breaking down (chemically) and leaking polysulphide ions into the surrounding electrolyte.

Ultimately, preventing the polysulphide shuttle from occurring in Li-S batteries could open a lot of commercial opportunities for these batteries given that their energy density can up to five times as great as commercial Li-ion batteries. A lot of progress is being made on all fronts and if the research continues to produce Li-S batteries that are stable and efficient over long time periods, then it won’t be long before we see their use commercially―but it could still be a while before we see mass adoption.