The apparent inevitability of this law has been a constant when designing motorised and electrical devices. And why cooling is such an important consideration.

It’s the reason appliances like food processors get so hot and why fans in PCs can sound like a jet taking off when it’s doing something intensive.

In most instances, the heat generated by conductors can be offset with something simple like air vents and motorised fans. However, the more intensive the task the greater the cooling.

Then there’s the question of propulsion systems and how to adequately balance weight, thrust, efficiency and cooling.

While we can offset waste heat with liquid cooling and venting, it inevitably hinders the advancement of technology as cooling solutions have their limitations. Which means we need to find another solution.

Vanadium dioxide is a dark blue, inorganic amphoteric compound which - unusually - has a phase transition very close to room temperature.

Its insulation properties are quite remarkable as VO2 can block infrared light and heat, without blocking visible light. In other words, it blocks the heat while still being useful as a window.

These unique properties have made it a much sought after material. Increasingly it can be found in cars and aircraft, allowing operators to ‘polarise’ windows. Which is something straight out of Star Trek.

It’s also starting to crop up in homes too. As climate change results in higher than normal temperatures, the ability to deflect heat away from our homes will become increasingly important. Especially for countries that experience high temperatures already.

Although if scientists and engineers can find a way of harnessing that reflected heat - perhaps by turning windows into solar collectors - these windows could also start to power our homes too.

If homes can power themselves - at least in part - then that reduces the dependency on fossil fuel power stations. Turning a preventative measure for one issue into a solution for another.

As clever as VO2’s ability to reflect infrared, this isn’t the material’s party piece. Vanadium dioxide has the ability to switch from a see-through insulator to a conductive metal at a temperature of 67 degrees Celsius.

In terms of producing conductive metals, vanadium dioxide is relatively inexpensive to manufacture as it requires such a low temperature to produce. Especially when compared to working with aluminium which has a melting point ten times higher.

Although the low temperature required to produce vanadium dioxide metal is impressive, what really makes it exciting is the fact that it conducts electricity without producing any waste heat.

This totally contradicts the Wiedemann-Franz Law, effectively ripping up the rulebook about everything we thought we knew about the conductors of electricity.

It also, rather conveniently, solves the problem the waste heat issue as for almost every electrical device in the world.

There are few industries that won’t benefit from the breakthrough as anything with a power source tends to create waste heat that has to be vented or dissipated. 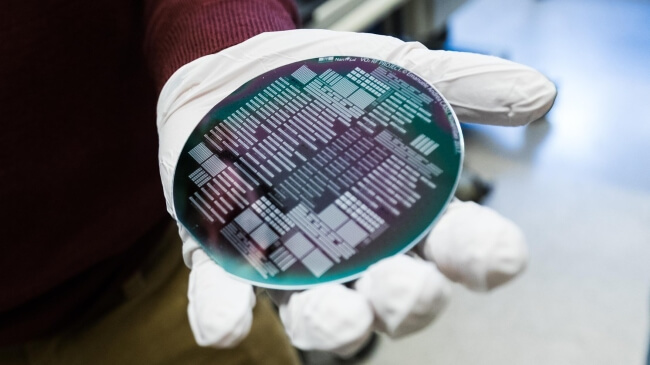 Solving the cooling problem not only makes devices and machines safer but more efficient. Energy wasted as heat will be turned into more electricity which means they’ll draw less power from batteries or the grid.

Similarly, server farms won’t need costly and wasteful air conditioning units. Or have to be built in naturally cold places. Or under the ocean. They can be built anywhere, making the best use of space.

In terms of our future in outer space, the reduction of risk can only be a positive step.

Obviously we need to solve the issue of using chemical rockets as they represent the biggest risk to safety. And the biggest challenge for long-distance exploration.

But the elimination of heat from electrical systems allows for far greater freedom in terms of how those systems are designed and fitted to any craft or installation. Which actually goes for anything constructed for us on planet Earth too.

Wearable technologies will especially benefit. Smart devices can become even thinner. Possibly making flexible tech viable rather than a gimmick.

Combining thread-based transistors with vanadium oxide could mean true smart clothing that can offer real functionality, without the risk of shorts and burns from wires running through the material.

The defence applications are similarly mind-boggling. The notion of powered - or partially powered - suits of armour have been on the military wish list for decades.

The issue has always been the huge amount of power, heat and cooling involved. If heat isn’t an issue then neither is cooling. This makes the electronics and servos more efficient, in addition to the suit not having to work as hard because it will be lighter.

Although still very much the domain of Halo and the local Warhammer store, if vanadium oxide holds the potential we think it does, powered armour will be seen on battlefields within the next two decades.

The Impact on Climate Change

A byproduct of putting vanadium oxide in electrical devices would be a significant reduction in waste heat making it into the environment. There would also be a decrease in global energy consumption.

Because server farms wouldn’t require cooling, the huge amount of energy needed to power them wouldn’t be needed either. Similarly, electrical devices and appliances would require less power to operate too.

Fewer components mean fewer raw materials and less power going into making them, reducing the carbon footprint per unit considerably. While producing less because they are using less power.

And because servers no longer need to be built somewhere cool, or require wasteful air conditioning systems, they can be built more or less anywhere making better use of a world fast running out of space.

The reduction in power consumption reduces CO2 emissions at a time when the world teeters on the edge of climate disaster.

Vanadium oxide can’t solve all the sins of conspicuous consumption but if it helps to reduce the number of parts needed, lower power consumption and decrease waste heat; while advancing technology, then it’s a huge step in the right direction.

Replacing the Silicon CPU: The Future of Microprocessors