Where once prosthetics were crude and simplistic, now they’re carefully engineered works of art. In fact, with breakthroughs such as neuroprosthetic limbs, there’s even the potential for prosthetics to interface with the human brain. Learn all about the future of prosthetics!

As the name suggests, neuroprosthetics combines neural processing with prosthetics. Essentially, these devices interface with the human brain to control artificial limbs. It works via a brain-computer interface (BCI), or a brain-machine interface. Using a brain-computer interface, it’s possible to control a computer using thoughts. Certain thoughts, like moving or flexing a muscle, create an electrical activity which in turn activates nerve cells as well as brainwaves.

Where neuroprosthetics differs from traditional prosthetics is that it’s more closely aligned to how the human body functions. When you move a body part, the brain sends electrical impulses which ultimately cause that limb to perform the desired task. Whereas a non-neuroprosthetic may be difficult to learn and control, brain-computer interfaces are, theoretically, easier to manage.

How do Neuroprosthetics Work?

A brain-machine interface relies either on a chip implanted in the user’s brain or electrodes placed upon the scalp. That way signals from the brain may be read by the prosthetic device itself. The BCI is an input/output device that bridges the brain and prosthetic devices. The same signals that would control an organic limb fire, and thus perform the desired function. 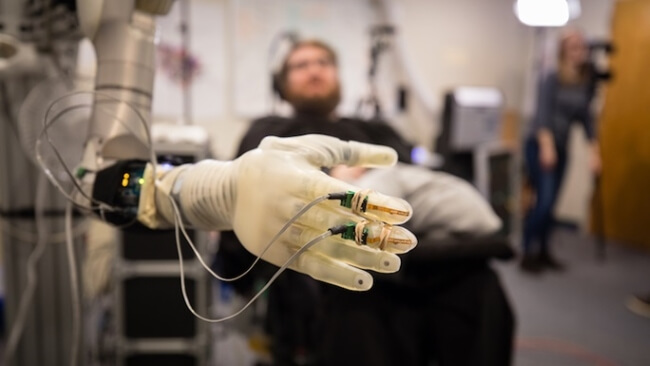 Man controls a prosthetic arm and hand at the University of Pittsburgh Medical Center.

The signals may be sent via electrodes on the scalp, the brain’s surface, peripheral nerves, and embedded within the brain. Depending on the type of electrodes used, it’s a pretty simple procedure or a rather invasive implantation. There’s a directly proportional correlation between ease of application and control. For instance, electrodes on the scalp work fine for simple control such as bending and straightening a knee. But electrodes implanted in a brain, or intraparenchymal electrodes, offer much greater fine motor control like the ability to control arms and drink out of cups. In between, electrocorticography (ECoG) offers a means of recording brain activity with electrodes placed upon the surface of the cortex. It’s less invasive as an electrode implanted into the brain but boasts more control than electrodes on the scalp.

But it’s not as simple as hooking up a brain-machine interface and connecting everything. Rather, brain imaging is first necessary. Mapping the brain provides intent into what a brain signal means, and how the body is supposed to respond accordingly. Artificial intelligence can expedite this process. Still, there’s definitely learning period wherein calibration is required. 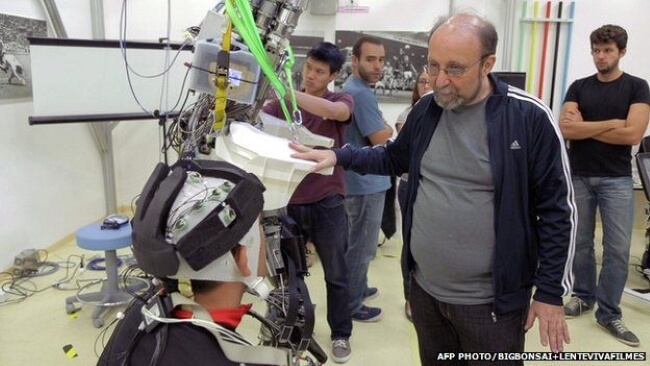 The Future of Prosthetics

Prosthetics, both neuroprosthetics and otherwise, have evolved greatly. Even a prosthesis that allows for running is a massive improvement from where the field began. Yet now brain-computer interfaces have been successfully implemented. A paraplegic man, for example, pulled off the first World Cup kick with a neuroprosthesis. Similarly, a Roman woman began using a BCI-powered hand that even senses touch. Once the subject of science fiction, neuroprosthetics have seeped into the mainstream with field-tested hardware. Expect the accuracy and ease of implementation to only improve.

China and Taiwan – Does China threaten the world’s biggest source of semiconductors?