Electrolyte performance in supercapacitors could be improved by using ionic liquids, salts that are detergents and which perform better as they get hotter.

A problem in lithium-ion batteries is the electrolyte can be flammable at high temperatures. To avoid using such electrolytes in supercapacitors, an ionic liquid was designed to be stable and non-flammable. During tests, it was found to perform better as it got hotter. Researchers also say that ionic liquids can be more environmentally friendly than existing electrolytes. Normally with electrolytes, the uncontrolled distribution of ions, electrically charged atoms or molecules, in contact with the charged electrode’s surface is how it functions. However, the advantage for ionic liquids is that their distribution, and therefore the ions, across an electrode, can be controlled, improving its function.

Existing supercapacitors can be charged and discharged at rates of up to two orders of magnitude faster than lithium-ion batteries. They can also last for hundreds of thousands of charge-discharge cycles without significant loss of capacitance.

This sandwich-like bilayer structure avoids a problem with other ionic liquids which is called overscreening. This is where the first layer of uncontrolled ions that collect on an electrode’s surface are greater in number than the corresponding charges, locations for the ions, on the surface of the electrode. This can cause a loss of efficiency in energy storage with a more scattered distribution of ions, or a thicker ion multilayer. The new class of substances with the improve ion distribution is referred to as surface-active ionic liquids (SAILS). 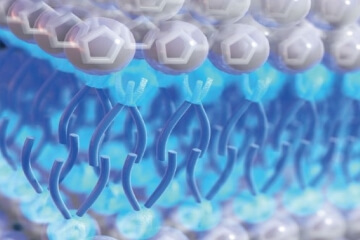 Illustration of detergent-like ionic liquids on an electrode surface.

The SAILS were found to be able to store more energy than existing electrolytes as the temperature rose. This also means the supercapacitor’s energy density would increase. This density increase has been predicted by the researchers to potentially be as great as a factor of four or five. It is this density increase that means future supercapacitors may be able to store more energy than batteries and replace them in electric vehicles, personal electronics, or power grid energy storage facilities.

The research was conducted by the University of Bristol, École Normale Supérieure de Lyon, University of Western Australia, Institut Max-von-Laue-Paul-Langevin and Massachusetts Institute of Technology (MIT). The work was supported by the MIT Energy Initiative, an MIT Skoltech fellowship, and the Czech Science Foundation.

Public cloud services: Will they open the doors to cyber criminals?