Bionic Eyes - The Future of Sight

Bionics have been the crusade of engineers, scientists and medical doctors for decades.

There has always been an unspoken understanding that there is only so much medical science could do for the human body and - sooner or later - technology was going to have to pick up the slack.

We’ve seen it already with a host of technologies supporting individuals with severe physical challenges, allowing them a degree of independent living and the ability to communicate. Early exoskeleton technologies are being trialled and even allowed a paralysed woman to dance with her husband on their wedding day.

Wearable technology is reaching the point of ubiquity and connectivity that soon choosing a pair of glasses at the opticians will be based on the operating system, not the frames.

However, for those with visual impairments - or blindness - recent technological breakthroughs could render the need for glasses all but obsolete.

36 million people around the world suffer from blindness. Until a few years ago there was very little that could be done to help someone once they had lost their sight.

In 2009 the first Argus II bionic eye was implanted into a patient by doctors at the University of Manchester. Although the term bionic eye is rather misleading. Cameras built into glasses send signals to an implant attached to the patient’s retina which the brain then interprets.

More than 10 years on and the technology has become far more sophisticated, with the Orion Visual Cortical Prosthesis System being implanted directly into the patient’s brain.

Attached to the occipital lobe, the electronics package contains a small transmission coil that wirelessly receives data and power from the system’s external components.

However, once implanted, it takes weeks for the implant to become fully functional. Each of the 60 electrodes in the array have to be individually tuned, which often requires repetitive calibration exercises.

Then it’s just a few months for the patient to get used to the system and learning how to get the most out of it. Which may seem an absurd amount of time but considering many patients lose their sight through disease or injury, a few months to regain something so precious is worth it.

However, the practicalities of wearing sunglasses with cameras mounted on them is obviously limiting. However, a team of scientists at Harvard may have come up with something that could change the trajectory of bionic eyes entirely.

For anyone with less than perfect eyesight, the world can be a blurry place. At least without annual trips to the opticians and spending hundreds on glasses or contact lenses.

However, a team at the John A. Paulson School of Engineering and Applied Sciences (SEAS), Havard have developed a tunable metalens that can focus like the human eye in real-time.

This has been made possible by artificial muscle technology, allowing the metalens to correct common vision defects.

The lens is made up of systems of nanostructures that help the lens eliminate the most common causes of blurred vision such as astigmatism. Considering how small these structures have to be - in order to fit inside a contact lens - the engineering involved is staggering.

In fact, they are so small that in order to eliminate spherical aberrations from a person’s sight, they need to be more

minuscule than a single wave of light.

Although a far cry for a Geordie Laforge style visor or the bulky bionics of the Warhammer 40,000 universe, it can go a long way towards correcting sight problems for millions.

But considering the technology is so new, there is every chance it can be developed further to enable individuals to see normally following procedures like cataract surgery.

It’s also conceivable the technology could be enhanced to the point where vision becomes almost superhuman. Not necessarily enhancing range, but enhancing someone’s sight to see in far greater detail, or enriching colours.

Theoretically, metalenses could be used to counteract colour blindness which would be miraculous on its own.
Considering 1 billion people around the world need eyeglasses there is unquestionably a market for metalenses, even if the current form of the technology can’t restore a person’s sight.

However, something rather fascinating was discovered during the development of the metalens. The team at Harvard had a problem. The metalens was required to manage a huge amount of data in order to effectively make real-time adjustments to maintain perfect vision.

The result was an algorithm that could cope with a tremendous amount of data held within nanostructures only 20 microns wide.

This algorithm happened to be highly compatible with the technology that governs basic integrated circuits. Considering the nanostructures of a metalens were smaller than a light wave, the breakthrough effectively married lens making technology with that of manufacturing semiconductors.

The lines between lens and computer chips have officially been blurred. 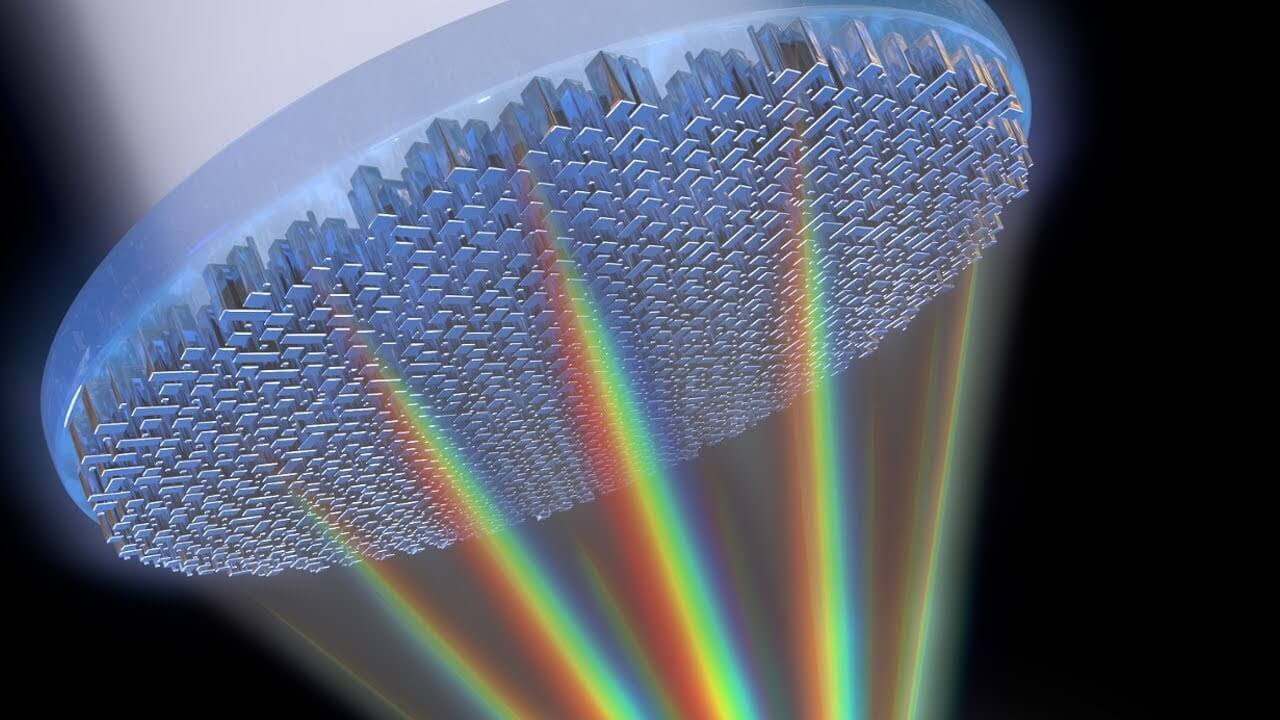 This is significant because - up to now - lenses have always been merely a piece in an optical set up that requires hundreds of components.

Now we can manufacture optical chips. This can make digital cameras and the digital camera components for smartphones significantly easier and cheaper to make.

Due to the large energy density, optical chips will also be able to transmit tremendous amounts of data, without the need to convert optically received information into another format.

Where this gets really exciting is the overlapping technologies could be used to create a true bionic eye or eyes to replace those of a blind person.

We’re into some high-sci-fi and slightly ghoulish territory, but eye transplants have been possible for years. This is just the next technological step.

Considering prosthetic eyes can be made to look exactly like their counterpart, there’s no reason why the same treatment couldn’t be applied to a bionic eye as well. It doesn’t have to terminator style glowing red orbs. Not unless you really want them.

Moreover, the use of artificial muscles in metalenses could allow bionic eyes to appear indistinguishable from the organic originals as they would react to changing conditions.

Of course, there are various issues to overcome. The first is whether or not someone would want their eyes replaced with a pair of electronic eyeballs. It’s not a small ask, even if the trade-off is the gift of sight.

It’s also unclear how the bionic eye will attach/link with the brain or how it will be powered.

Having to remove one's eyes each night for cleaning, charging or both presents obvious problems.
The power supply would also need to be safe and capable of holding its charge for at least 24 hours. Unless scientists can figure out a way of using the body’s electrical current to keep the batteries topped up.

It’s clear that the technology is there, it’s just the grasp of it that is lacking. However, there have been significant leaps in the current ‘bionic eye’ technology in just 10 years. So it’s reasonable to assume that by 2030 bionic eyes will not just be possible but commonplace.