Analog Devices (ADI) has announced a power solution to maximize efficiency and minimize the electromagnetic (EM) emissions of motion systems for companies and factories migrating to Industry 4.0.

With the increased adoption of industrial automation and Internet of Things (IoT) technology within smart factories, there is a growing demand for intelligent technology and features within systems to ensure maximum efficiency. Industry 4.0 is a technological ecosystem for factories that includes, artificial intelligence, automation, additive manufacturing, sensors and it is all connected through networks and the Internet. This all enables what is called smart manufacturing.  Electric motor-driven systems account for 40% of global electricity consumption, according to the International Energy Agency, and improvements in motor efficiency can have wide-reaching economic and environmental benefits.

“Flexibility and efficiency are two key tenets of a secure, connected enterprise. Previously, the typical solution was to choose a gate driver strength that would enable adherence to EM [electromagnetic system] system regulations at all operating points, meaning systems were often over-engineered and under-utilized,” said Analog Devices’ interface and isolation technology group director, Mack Lund. “Now, users can dynamically move from a slower to a faster switching transition, thus optimizing EM emissions without sacrificing efficiency. In short, you no longer have to leave performance on the table when trying to achieve lower emissions and power consumption.” 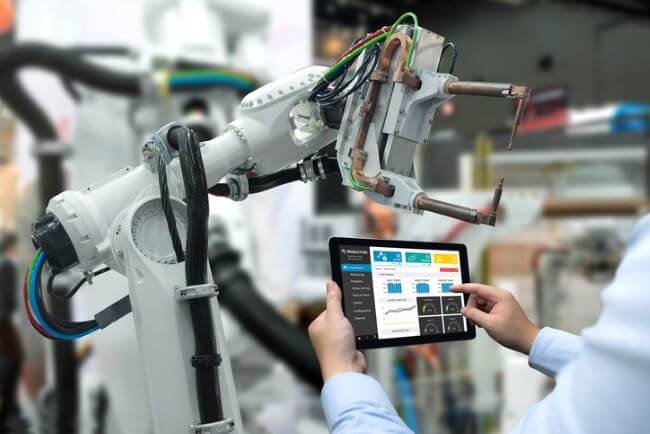 The ADuM4122 is the first simple solution that can control how fast or slow a MOSFET or IGBT turns on or off by user command, on the fly, thereby controlling motor currents. The ADuM4122 is a simple dual-drive strength output driver that efficiently toggles between two slew rates controlled by a digital signal. Smaller than existing discrete or complex integrated solutions that have 20 or more pins, the ADuM4122 features only eight pins and works in a variety of operating conditions. The ADuM4122 further improves system capabilities with high common-mode transient immunity and low propagation delay for high-performance applications such as motion control, robotics and energy.