Geoshift in the Power Market

What is Geothermal Energy?

Geothermal energy technology is currently underused but starting to emerge in certain suitable locations as part of the overall mix of renewable energy sources. It works on the principle of drilling down into a known geothermal reservoir, then coupling this pipe with a return pipe. Hot geothermal fluids flow through the pipework to a power plant and generate electricity via a secondary working fluid. This secondary fluid is allowed to expand rapidly, to drive a turbine - in the same way as for traditional power stations using mainstream conversion and control electronics.

The first-ever geothermal power plant was set up in Larderello, Italy, in 1904. Steam from that geothermal source turned a small turbine, and this, in turn, supplied electricity to a humble array of five light bulbs. The largest geothermal site in the world today is located in California. The Geysers Geothermal Complex, which is located just north of San Francisco, is comprised of 18 separate power plants. The US has managed to position itself as the leading global consumer of geothermally-generated power, providing almost 3.7GW to its national grid. This doesn’t compare too favourably to over 500GW that the country gets via solar panels, however.

One key advantage of geothermal technology is that the plants produce electricity consistently - running 24 hours a day, 7 days a week. The output of a geothermal power plant is highly predictable and stable, especially compared to solar and wind-based sources. This allows the plants to meet baseload energy demand, with the other technologies then picking up the slack. However, it should also be noted, that geothermal power plants can do more than just generate electricity. They can be used for both heating and cooling buildings through geothermal heat pumps, as well as enabling direct-use heating applications to be realised.

The well-documented, and recently demonstrated, volcanic activity across the expanse of islands that make up Indonesia means that it is the second most active user of geothermal power - with 2GW being generated. It hosts the most significant single geothermal power plant, at Sarulla, which generates over 320MW of power. Indonesia is marginally ahead of the 1.9GW that the Philippines can draw off. Meanwhile, Iceland generates 755MW from a handful of plants. Turkey and New Zealand are also active proponents of geothermal power generation, due to these countries' sizeable volcanic regions. 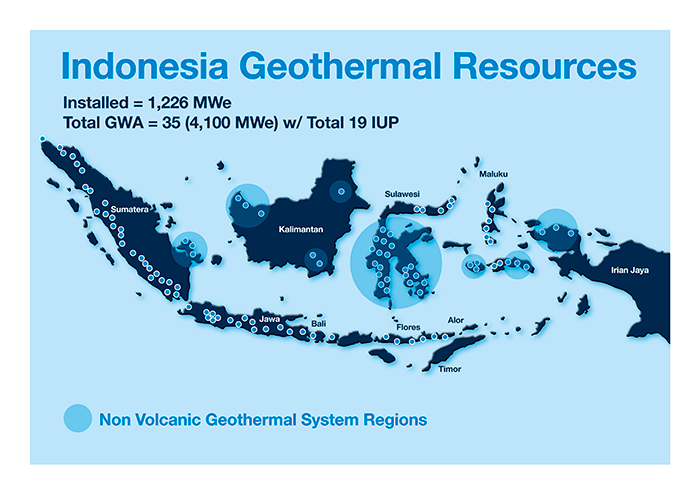 Geothermal Energy in the UK

The UK is even getting in on the act. The British Geological Survey (BGS) has submitted a planning application to Cheshire West and Chester Council (CWACC) with the intent of placing a GeoEnergy observatory on Ince Marshes. This follows on from the first 199m deep borehole at the GeoEnergy observatory that is soon to go into operation near Glasgow. Glasgow’s observatory will allow researchers to determine whether warm water within disused mine workings can generate a useful geothermal heat source that could thereby become a sustainable part of the UK’s ongoing energy strategy. Over the next 15 months, the drilling team here will create 12 boreholes from across a 2sq.km area. The team working at the sister site in Cheshire, if it gets the go-ahead, would drill a total of 50 boreholes (some up to 1200m deep) across a 12sq.km area. These would contain an intricate network of 1800 seismic sensors and 5km of fibre-optic cable for the transmission of data on earth tremors.

Geothermal resources are proving to be most accessible in the western states of the US - from Colorado and New Mexico up to Utah, Nevada, Idaho and Oregon. Enhanced geothermal systems (EGS) technologies and deep direct-use (DDU) capabilities could open up 100GW of additional capacity by 2030, according to the US Department of Energy (DoE). A number of ventures are looking into new ways of mapping and monitoring deeper fractures and fissures that might heat the water to generate power more efficiently.

Three projects being embarked upon at the National Renewable Energy Laboratory (NREL) will tap geothermal energy so it can be used in advanced energy storage applications, as part of the DoE’s ambitious Grid Modernisation Initiative. These newly funded endeavours will explore unconventional uses of geothermal technologies to improve grid reliability, resilience and security.

The first of these will utilise depleted natural gas wells, channelling excess electricity so it can enable the compressing of air into underground shale gas wells. When electrical demand grows, the energy could subsequently be released through a turbine to generate the electricity required. The intention is that this project will also study storing waste heat from the compression process underground to improve overall efficiency. "This is an idea that we've been nurturing for a couple of years and it's exciting to get a chance to devote some real time to developing it,” explains Chad Augustine, a researcher in NREL’s Techno-Economic Analysis Group, who will lead operations.

Another project will study the feasibility of coupling geothermal technology with energy storage for communities in cold climates, whereas the third will look at the practicalities of coupling a geothermal power plant with a concentrating solar power (CSP) system to store additional heat from the CSP system in the underground geothermal reservoir. The solar heat would increase the temperature of the already hot water in the reservoir, enhancing power plant performance and boosting its efficiency levels. There is still, clearly, much to be done if society is to harness the geothermal energy that the Earth can offer, but this sector is gaining greater momentum all the time.

LG Electronics Urges the Australian Government on Right to Repair

Driving to be Safer with In-Car Monitoring