The power of tides and waves has always presented our society an attractive potential source of energy, but there have been many engineering challenges associated with trying to capture it. Advances in tidal technology - from stronger composite materials to more efficient ways to convert movement to electricity - have led to a boom in the development of such systems. However, the path from prototype to production is lengthy, and some projects, such as the Severn Barrage in the South West of the UK that has been proposed for many years are still to make it off the drawing board.

The barrage is possibly the most recognisable form tidal energy system. This effectively places a blockade across an ocean bay or lagoon. Gates control the flow of water through the barrage to drive turbines as the geographic basin fills on the incoming high tide and empties on the outgoing tide. The Severn Estuary (which separates the English counties of Avon and Somerset from the Welsh counties of Gwent and Glamorganshire) has the second highest tidal rise and fall in the world at a staggering 14m. Little wonder then that it has been suggested as the site for such a tidal energy system for well over a decade.

The £20 billion scheme would have a total of 214 40MW turbines incorporated into the 16km barrage, with a vast set of shipping locks to allow seafaring vessels to pass through. Designed to last for 200 years in an uncompromising application environment, this would be the world’s largest ever renewable energy project, and require engineering effort on a comparable scale to building the Channel Tunnel. It would generate 8.6GW of power during peak flow and 2GW on average, thereby providing around 5% of the combined electricity usage for England and Wales - equating to the output of eight power stations.

One issue with barrage systems is the effect they can have on plant and animal species. The changing water levels in the basin, and the increased movement of water can create serious ecological problems. However, with sufficient care being taken to protect the indigenous wildlife, these challenges can be overcome, and there are now several large scale tidal power barrages in operation in locations around the world. The Sihwa Lake tidal power station in South Korea has the largest electricity generation capacity at 254MW, while the oldest operating tide-based electricity plant is in La Rance, France, with 240MW of capacity. China and Russia are among the nations that also employ tidal power to meet their energy demands.

The world's largest tidal range of 16.3m is now being tapped by a barrage situated at the Bay of Fundy, in Canada. This started generating electricity in July of 2018. The Cape Sharp tidal project connects a dual-turbine, 4MW system at the Fundy Ocean Research Centre for Energy (FORCE) site, in the Minas Passage, to Nova Scotia’s electrical grid. The production system (which is deployed alongside an earlier demonstration system) relies on upgraded turbine technology to heighten operating efficiency levels. Improvements have also been made concerning the environmental monitoring programme, by working with fishers, native communities and wildlife organisations. 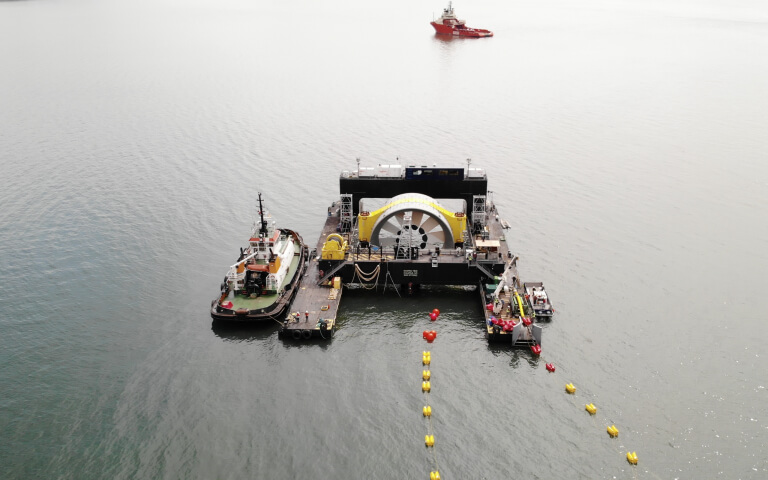 Tidal turbines offer an alternative electricity generation option to barrages. These are similar to wind turbines but are placed on the seafloor to take advantage of the currents present there. As water is 800 times denser than air, the turbines have to be much stronger than the wind versions and so are much more expensive to build. Projects in Scotland and South Korea have tidal turbines with 1.5MW capacity, and the Scottish implementation aims to create a total of 400MW of electricity generation capacity. A demonstration tidal turbine project is also under development in New York’s East River.

UK developer Marine Power Systems (MPS) believes that a floating variety of this renewable energy technology that makes use of wave power is also possible. It has constructed a quarter scale version of its WaveSub product that is currently being tested out in open water. This has shown that the platform with turbines can be successfully towed to different locations and remotely controlled to position it at an optimum location in the water. 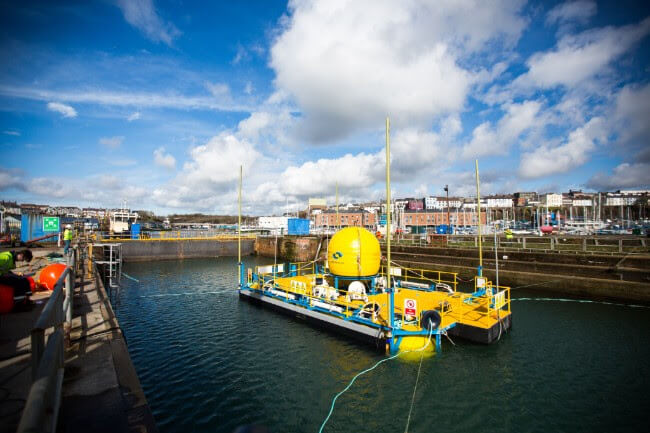 The WaveSub was towed 169 nautical miles from Wales to Cornwall to be part of the RaBTest marine test site and connect to the local power grid. MPS is working on reducing the size of the power systems to cut the costs and enhance the stability of the platform. With 1.2m backing from the European Ocean Energy ERA-NET Cofund, MPS is collaborating with Swedish turbine maker SKF on a pitch controller to elevate overall performance. The module will control two sets of blades with 20m rotor diameters, the largest the company has installed to date.

The Targeted Optimal Pitch module for Floating Tidal Energy (TOPFLOTE) project will develop a controller for floating tidal turbine blades, allowing the blades’ pitch angle to be readily varied in real time. This will enable the management of dynamic loadings and optimise power performance. “Pitch controllers have enabled the dramatic increases in turbine and blade scale that we’ve seen in the wind energy sector over the past decade resulting in significant energy cost reductions. We are delighted to be working with SKF on this project which will unlock similar improvements for our technology, where we are targeting up to a 50% increase in yield from our machines, bringing our performance firmly in line with more established technologies,” said Orbital Marine CEO, Andrew Scott.

The pitch module will be engineered through the course of 2019 and then included on the next generation demonstrator turbine, the 2MW Orbital O2, that is scheduled to be installed at the European Marine Energy Centre, Orkney in 2020. This has a floating microgrid connector to carry the power to land-based consumers. The centre also hosts a wave energy generator from another Swedish firm - CorPower Systems. The half-scale demonstrator is part of the €10.5m, three-year WaveBoost project to create reliable wave power energy converters.

Tidal and wave energy both have tremendous appeal, but also have tremendous challenges associated with them in terms of financial investment, accessibility and reliability. Barrages have the advantage of being easily linked to the electricity grid on land but struggle with the high costs and environmental impact. Undersea and wave-top turbines are in their infancy, using the experience of the wind-powered versions with next-generation materials and control systems, but pose sizeable difficulties when looking to connect the power generators back to the land.

Ultrasound Technology: A New Feature In The Electronics Industry