The proliferation of IoT in recent years has led to a substantial increase in the amount of electronic components employed for advanced control in an assortment of applications. This trend towards greater electronics density is driving to noisier environments, making it particularly difficult to execute designs with EMC. Op-amps play a crucial point role as they quickly amplify small signals (from sensors) in many detection systems that deliver safety. Also, PCB designs can also be problematic for conventional op-amps that are sensitive to oscillation due to capacitive loads, such as from wiring.

To mitigate noise issues common with conventional op-amps, ROHM has developed the EMARMOUR series offering superior noise-tolerant op-amps. The newest device combines two op-amp devices that stop oscillation while delivering high-speed amplification with slew rates up to 10V/µs and breakthrough immunity to EMI. The output voltage over the entire noise frequency band is limited to under ±20mV, which is ten times lower than a conventional op-amp. High-speed signal amplification is now attainable without being influenced by external noise or load capacitance when utilised in devices that output small signals such as sensors, therefore enhancing reliability while simplifying circuit designs. 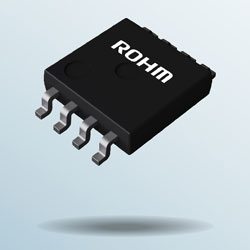