High-performance FPGAs simplify board design and inspection and assembly

Microchip Technology has released its RTG4 FPGA family, which is the first in a CQFP option to qualify for the industry’s QML. The achievement will allow space system developers to produce systems employing more reliable packages that simplify the layout and routing of PCBs that are also easier to assemble and inspect.

“We have culminated years of testing, verification and flight heritage to offer a CQFP FPGA at the RTG4 FPGA density and performance level that is qualified to QML Class V, the highest reliability standard for spaceflight systems,” said Shakeel Peera, associate vice president of marketing for Microchip’s FPGA business unit. “Our high-speed radiation-tolerant RTG4 FPGAs were the first of their kind to achieve QML Class V qualification in any package type. They also were the first in their class to be offered in the 352-pin CQFP that is one of the most popular package types for space flight systems.”

The CQFP package with 352 pins for RTG4 FPGAs simplifies system design in applications varying from satellites and space probes to planet landers and vehicles. This package option is easier to assemble than Ceramic Column Grid Array packages, further enhancing reliability while allowing a more cost-effective system integration alternative to higher-pin-count alternatives. It is excellent for control applications that do not need a high number of inputs/outputs (I/Os) or frequent switching and a high number of temperature cycles.

The devices give space systems new high-speed signal-processing capabilities and leverage reprogrammable flash memory to offer greater immunity to configuration SEUs while consuming 40-50% less power than competing SRAM FPGAs. The devices feature 150,000 LEs, 462 multipliers and 5.2Mb of memory. With this qualification, the company is now capable of offering a full range of qualification and screening options for RTG4 FPGAs in the CQFP package ideal for a broad range of space missions from class 1 applications that need QML-V components, to low-cost New Space constellations with relaxed screening needs. 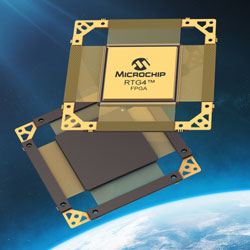