Yokogawa has released the DLM5000, a new generation mixed-signal oscilloscope with options for four or eight analog inputs.

The new oscilloscope succeeds the previous eight-channel DLM4000 model. With redesigned hardware, the device provides major improvements in both performance and operability, incorporating a sampling rate double that of the previous model.

Created to be extremely adaptable and flexible, the device satisfies the precise demands of companies in industries such as automotive, aerospace, mechatronics, power electronics, railway and consumer electronics.

Terry Marrinan, VP sales and marketing Yokogawa Europe and South-East Asia, says: “With its eight analog channels and the ability to link up with other units, the DLM5000 sets a new standard in measurement flexibility. The large number of data points needed in the analysis of inverters, motors and mechatronic systems means that more channels are needed to capture that data. The Yokogawa DLM5000 meets the demands of today’s development engineers, giving them the features they need to analyse thousands of captured waveforms.” 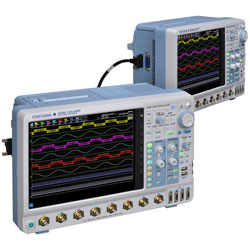