Winbond Electronics has revealed a new class of NAND Flash ICs which gives high quality and long data retention ideal for use in mission-critical code storage applications at densities of 512Mb (64MBytes) and above. The company's new automotive-grade SLC HQ serial NAND Flash parts will allow automotive system manufacturers to implement code storage in complex new applications such as autonomous driving systems, which typically need large capacity of 512Mb (64MB) or more, at a much lower cost-per-bit than the standard choice of NOR Flash offers. "Because of the inability of NOR Flash to scale below 45nm, the high cost-per-bit of NOR for code storage is built into the bill-of-materials cost – there is no prospect of it falling as demand for higher densities rises. Winbond has solved this problem by enabling the use of NAND Flash instead, at less than half the cost-per-bit of 45nm NOR Flash today and with a clear route to an even better cost-per-bit at the next 3xnm node," said Syed S. Hussain, Director Flash Marketing of Winbond Electronics. 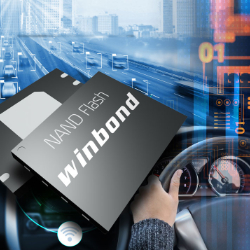