Yokogawa has introduced an enhanced version of its best-selling WT300 Series of compact 5th-generation digital power meters featuring higher accuracy, new measurement functionality and improved connectivity including Modbus/TCP capability to aid integration into production environments. The new WT300E Series has a basic power accuracy of ±0.15% at 50/60 Hz on all measurement ranges - the highest level of accuracy available in any compact power meter – along with a bandwidth of DC and 0.1Hz to 100kHz. The influence of power factor is also greatly reduced: at low power factor the accuracy is twice that of the previous models (±0.1% of apparent power S). The WT300E series covers a broad range of input currents from a few mA up to 40A RMS, making it equally suitable for measuring low currents in standby power testing to the high currents encountered in induction cookers. It can also measure waveforms with both AC and DC content. The WT300E Series contains four models: the WT310E single phase (including extremely low-current measurement capability down to 50µA); WT310EH single phase high current; WT332E two-element; and WT333E three-element. For the engineer doing standby power measurements, Energy Star(R), SPECpower and IEC62301/EN50564 testing as well as battery-charger and other low level power measurements, the WT310E is the ideal solution. The WT310EH is a single-phase high-current version with current ranges from 1A to 40A RMS. The bandwidth on this model is DC and 0.1Hz to 20kHz. The WT332E is a two-element meter for use on split-phase and three-phase/three-wire circuits. The WT333E is a three element meter for use on three-phase/three-wire or three-phase/four-wire circuits. These models have current ranges of 0.5A to 20A RMS, with low-current measurements down to 5mA. All models have voltage ranges from 15V to 600V RMS, and low voltage measurement capability to 150mV. The new instruments are particularly suited to measurements on today’s power conversion circuits using energy-saving switching techniques, which can cause highly distorted voltage or current waveforms with high harmonic content. They also have a new enhanced low-frequency measurement capability of 0.1Hz in addition to the upper bandwidth limit of 100kHz. An optional harmonic analysis function is available which provides simultaneous measurement of both the normal power parameters and harmonic data for faster and more accurate power analysis. Harmonic analysis and total harmonic distortion calculations can be made up to the 50th order from a 50Hz or 60Hz fundamental frequency. An integration function measures ampere-hour and watt-hour parameters: tests that are especially important for standby power measurements. In the standby mode the current can be very low, but it can increase substantially when the device goes into operational mode. The new auto range feature will optimise the range setting for maximum accuracy measurements. Yokogawa’s 'average active power' function makes it possible to measure power consumption under conditions where the power fluctuates greatly. With this system, watt-hours are measured over a time period, and the time is divided out to give an average power reading. A new feature has been added to the data update rate. The WT300E series can follow fluctuating input frequencies, which typically occur in motor applications, by changing the data update rate automatically. Starting from the lowest 0.1 Hz input, this function can will detect cycles of the input signal automatically and measure it correctly. All the industry standard communication interface ports such as USB, GPIB, RS232 and Ethernet are available for the WT300E series. The standard interface is USB plus GPIB or RS232, with Ethernet as an available option. Measured digital data from the WT300E series can be acquired by Yokogawa recorders via Modbus/TCP, aiding integration into production environments. Yokogawa’s WTViewerFreePlus software is provided with each WT300E unit. This permits displaying and saving the measurement data, numeric values, waveform display and trend graphs. IEC62301/EN50564 software for standby power measurements is also available as a free download, says the company. 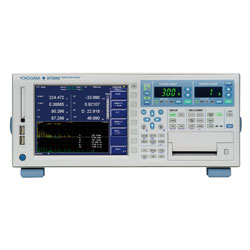