Novotechnik, the German sensor designer and manufacturer represented
exclusively in the UK by Variohm EuroSensor, has recently announced that two
of its non-contacting sensor models have gained E1 approval according to the
UN/ECE R10 environmental compatibility category for interference emission
and immunity.

The approval, by the German Federal Motor Transport Authority (KBA), permits
the RSC-2800 and RSC-3200 sensors to be used throughout Europe on vehicles
such as cars or buses, and also extends to mobile machinery such as
agricultural machines, diggers or cranes that may run on roads reaching
speeds or more than 25km/h.

Both sensor types benefit from Novotechnik's specially developed contactless
non-contacting Hall Effect principle where the orientation of the magnetic
field is measured. The ECE-R10 (E1) approval applies to ratiometric output
versions with the RS-2800 offering a redundant output. 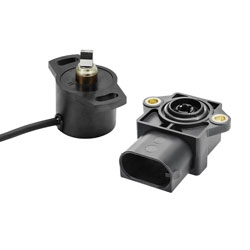