Recently, researchers from the University of Chicago demonstrated a wearable sensor able to record biodata with the help of an integrated neuromorphic chip. What challenges do wearable medical sensors face, what did the researchers develop, and how can such devices help the medical field with patient care?

Here at Electropages, we have covered numerous research breakthroughs in the field of wearable sensors and the many challenges that wearable devices face. One such issue is that modern electronics are based on rigid materials, meaning they express very little flexibility. As the human body is organic and flexible, integrating ridged parts into worn devices and clothing can make them very uncomfortable. For this reason, wearable devices have only been realised as smartwatches and smart glasses (that are themselves ridged).

Recent advances in polymer technologies and chip packages have helped researchers to create wearable sensors that are flexible and comfortable, but this introduces a new challenge; data recognition. To better understand the obstacles flexible sensors face, we first need to see how such sensors massively differ from mainstream methods.

However, creating a wearable ECG presents a major challenge in that such a sensor would be placed in one area of the body. This means that the sensor would not have a ground reference (i.e. the leg), nor would it be able to read voltages across the body. As such, direct readings from such sensors cannot be used, and this challenge makes wearable sensors highly problematic, especially for detecting heart rate (but other measurements can also be affected, including brain activity and breathing). Additionally, ECGs are used in controlled environments with the patient lying down on a bed, while wearable sensors would be used when doing numerous activities and, as such, would be exposed to all kinds of noise.

To get around this issue, researchers from the University of Chicago’s Pritzker School of Molecular Engineering have recently demonstrated a new stretchable sensor that mimics human tissue while also interoperating a neuromorphic device for better data collection. The flexibility of the new sensor was achieved with the use of polymers that can be used to create flexible substrates, semiconductors, and sensors, and the researchers demonstrated that their device can continue to operate even at 100% strain.

To demonstrate their sensor’s capabilities, the researchers trained their sensor to recognise the difference between normal and abnormal heartbeats. Once deployed, the sensor was able to accurately provide data even when under mechanical stress, including tension and compression. 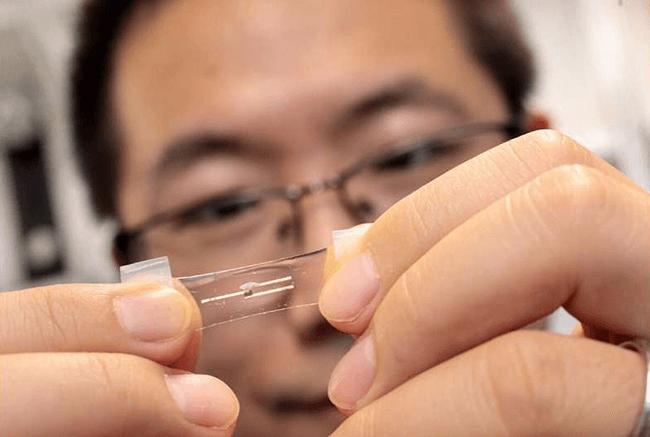 How could such devices help with patient care?

Interestingly, wearable devices such as those developed by the mentioned researchers will unlikely ever be used in hospital environments due to the readily available access to precision equipment. But where such sensors will be invaluable in preventative care and outpatients during post-op care.

Generally speaking, most conditions become harder to treat the longer they are left. For example, identifying a potentially cancerous mole before it has spread can be cured with a slice from a knife and a plaster, but a skin cancer that is allowed to spread is complicated to remove. This is why identifying issues early on is so important and why doctors insist that people perform self-checks for anything suspicious and help maintain a healthy lifestyle.

Now, it’s straightforward for a doctor to perform such self-checks (as they know what to look for), but not so much for those without medical training. Worse, many conditions can remain hidden for long periods, suddenly becoming a problem. There are numerous examples of healthy runners suddenly dropping dead due to a heart attack that could have been prevented if an ECG had been performed.

As such, wearable sensors will be highly advantageous in long-term medical monitoring that can identify changes in personal health. If such a device detects an abnormality, it can warn the user of the changes and recommend a doctor’s appointment for further investigation. At the same time, the data gathered by the sensor can be handed to the doctor to provide more insight into the patient.

Such wearable sensors are also ideal for outpatient care who want to return home after an operation. One big challenge faced by recovering patients in hospitals is secondary infections, and the risk of secondary infection greatly rises the longer a patient remains in the hospital. As such, wearable sensors would be able to identify changes to the patient's condition while also allowing for remote monitoring of patients sent home.

When will the UK's pitiful broadband improve? Don't hold your breath