The Use of AI for Improving PDT Cancer Therapies

Photodynamic therapy (PDT) is a common anti-cancer treatment. There are several key advantages to why PDT has been used a lot, including the ability to target cancer cells over the body’s healthy cells and being a method of low toxicity for the body. In PDT, a photosensitiser is administered to the cancer patient and absorbed by the cancerous cells of a tumour. The photosensitiser is then activated by a specific wavelength of light.

Oxygen, a photosensitiser, and light are needed for PDT, and all three play important roles in providing therapeutic treatment. In clinical settings, a laser is typically used to activate the photosensitiser, exciting it in the process. When oxygen is present in the local tumour environment, the excited photosensitiser generates reactive oxygen species (ROS). The ROS subsequently induces intracellular oxidative stress, which triggers the death of the tumour cells.

Even though PDT is a common technique used by healthcare systems worldwide, improvements in the therapeutic offering are constantly being sought. Advanced wireless technologies have started to be implemented in PDT therapies to remotely deliver light to the tumours and increase the efficacy of the treatment. However, some wireless systems are not as efficient as larger laser systems—in terms of tissue penetration and photosensitiser activation—but it’s thought that AI could help with improving the efficiency of wireless PDT therapies.

The Hardware Limitations of PDT

While lasers are more than capable of inducing enough light energy to kill a range of cancer cells, there are limits to how far the light can penetrate. So, tumour cells embedded deep within the body are less likely to get the amount of light required to kill all the cancer cells. This is not typically an issue for tumours nearer to a patient’s extremities. When looking to overcome this, it’s not possible to provide physical tethers to light sources as this would make it a lot harder to actually control the process so that it hits the intended tumour cells. So, one of the ways in recent years that has been proffered and trialled is to use wireless technologies that can provide a controlled delivery of light to cancer cells embedded deep within biological tissue.

Wireless technology continues to advance and has been brought about by advances in miniaturisation and communications. There are now wireless devices which can provide controlled delivery of light directly to tumour cells in a host. Many different facets need to be considered when creating these wireless technologies, including a high degree of biocompatibility.

The wireless devices being trialled for PDT use miniaturised optoelectronic devices that utilise electromagnetic wave propagation—at a high frequency or ultra-high frequency range—to convert radiofrequency energy into optical energy. The output is a single wavelength of light, and while the devices to date have several benefits, it is much harder to activate photosensitisers with a single wavelength of light, as many photosensitisers will have multiple absorption peaks—where they absorb different wavelengths of light simultaneously.

There is also a lack of high-throughput methods for analysing the outcomes, and most wireless approaches require the use of an RF generator. However, these take up a lot of space as they have to be spaced at least one metre apart to avoid electromagnetic interference, limiting their use in clinical settings. So, while there’s the potential for wireless technologies enabling cancer cells to be treated that might not otherwise be reached, solutions have been sought that are more suited to a clinical setting.

The Use of AI with a Wireless Telemetry System

Because most photosensitisers can absorb more than one wavelength of light, there is the potential to improve the performance of wireless device PDT by producing and directing more than one wavelength to the photosensitiser. In most systems, light sources that have different turn-on voltages are used, and when two different wavelengths of light are connected in parallel or share a node in a circuit, the voltage becomes regulated to the lower voltage. When this happens, only a single colour of light is activated. So, multichannel platform devices must emit more than one colour of light, but most existing multichannel devices are not suitable for wireless power systems.

However, researchers have now created a low power wireless telemetry device that uses a neural network program known as DeepLabCut (DLC) to overcome the challenges presented by many other wireless light source devices. The device has an integrated Monte Carlo thermal/light simulation platform that produces an optimised combination of wavelengths and light sources to target the right areas and the right wavelengths of light.

The DLC-assisted wireless telemetry uses the parameter sets from the simulator and integrated software to provide an optimised illumination for different tumours using multiple wavelengths of light. This provides the most effective PDT for that specific tumour. The tests have been performed on mice, and the device has also shown to have a high throughput, where it was used to illuminate tumours on over 20 mice by activating many of the implanted devices simultaneously. 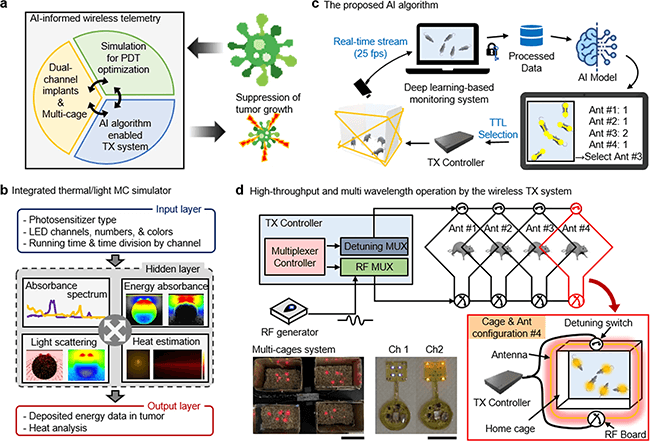 The wireless device can be implanted into animals (currently) with ease and allows for the selective and uniform delivery of multi-wavelength light to tumours—something which many wireless PDT light sources have struggled with. The device uses a single RF source and has been shown to suppress tumour growth at the animal level—using different photosensitisers—so they show promise for clinical use in humans. The algorithm already yields fairly accurate predictions; the performance could theoretically be enhanced by integrating predictive models—such as recurrent neural networks—to locate the tumour site more effectively.

The recent study to create these AI-assisted telemetry devices has been primarily focused on colorectal cancer, but it’s believed that the devices could be used for all solid cancers. PDT is already used in a clinical setting as an alternative to chemotherapy and radiotherapy and has a lot of potential to be an even better solution than it is now. Opening the area to more wireless devices that can activate photosensitisers is likely one of the next big advancements that could improve the clinical efficiency of PDT. Still, it could be some time before they are seen in a clinical setting.