Storing Information and Data with DNA

Data is at everyone’s fingertips in our current high-tech modern-day world, and the amount of data available to us all is exponentially increasing by the day. Over the years, and throughout the data boom age of the last decade or so, companies have sought ways of storing more significant amounts of data (both in hardware and in the cloud) and have looked at ways of storing large amounts of data in smaller hardware architectures.

Now, it’s safe to say that we wouldn’t have many of the modern-day technological capabilities if it weren’t for the ability to store this data. However, as the world continues to create more and more data, it needs to be stored somewhere. If the production of data carries on at the same (or greater) rate than we are currently producing, the amount of data will soon outpace the available data storage capabilities, so scientists and engineers are still trying to discover new cutting-edge data storage methods.

Most people know about DNA (aka deoxyribonucleic acid) as the molecule that holds the information, i.e. the genetic codes, within our bodies. What some people don’t realise is that this equates to a seriously large amount of information being stored within a single biomolecule. DNA molecules can store up to 215 petabytes, or 215 million gigabytes, of data in a single doubled stranded molecule, making it one of the highest storage density mediums in the world. Simply put, the information storage devices within our bodies are much more capable than we can currently create, so there has been a lot of focus in trying to harness the power and data storage capabilities of DNA for our own man-made data storage systems.

It’s not just the storage density of DNA that is appealing; it also has a long usable lifetime and has a very good energy efficiency compared to other storage mediums. While there are several ways that DNA can be utilised within storage devices, a typical DNA data storage system involves encoding the data onto a series of DNA sequences, which generates a pool of DNA strands that stores the data. To read the data stored within these devices, the DNA strands are read by a DNA sequencer and the information held within the strands is decoded back into an electronically compatible form.

As it stands, a lot of the databases used in DNA-based storage devices are static, but many believe that these devices could include some dynamic aspects, and this could push the capabilities beyond what is currently possible. These dynamic implementations could be the key to realising commercially viable DNA-based storage systems.

While the possibilities of DNA data storage devices are enormous, there are a few areas that need to be optimised before they are suitable for widespread use in our information and data storage systems—but this is nothing new, as all technologies need to get through similar optimisation phases.

As it stands, there are some limitations to using DNA as storage material in man-made systems, and its use often involves some trade-offs and compromises to be made. These trade-offs tend to be around the dynamic aspects of the storage devices, such as the physical scalability, encoding density or the reusability of the devices, as creating a device with all three capabilities has been a sticking point in DNA storage device designs.

For example, if we take the most common DNA-based storage-based method—which is the polymerase chain reaction (PCR) storage method. While it is a scalable method, it does require a portion of the physical database to be removed and amplified, affecting the number of times the storage system can be accessed—and this is a reason that DNA-based storage devices have been touted for cold storage devices that don’t require regular access. It also requires the double-stranded DNA molecules to be melted in data payload regions, which means that while it can be encoded efficiently, the storage density suffers as a result.

Because of the inherent storage density of DNA and its potential to be used within our man-made storage devices, scientists and engineers are looking at new ways of creating these DNA-based storage devices without needing to compromise on any of the capabilities/performance areas.

A team from the USA have now proffered a solution that could help to solve the trade-off issues between the dynamic aspects within DNA storage devices. Inspired by microbiological and genetic research, the researchers created the device so that it would function in a similar way to how cells access information from their genome, i.e. so the man-made system is not too far removed from the natural process. 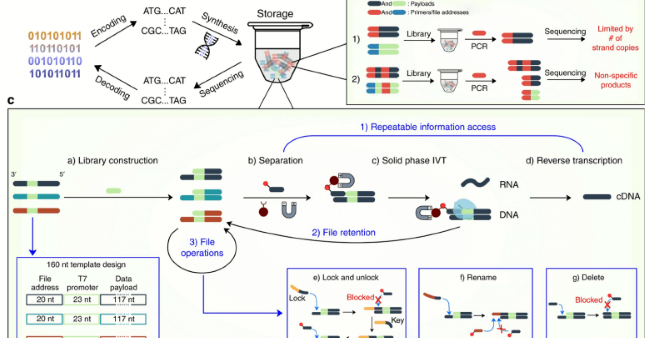 To achieve this, the researchers used a double-stranded DNA molecule which had a single-stranded (i.e. RNA) overhang. Each of these strands were used to store information, and data storage systems could be constructed using many of these strands. In such systems, each DNA strand would comprise of an information file, with the overhang strand having a specific base sequence that acts as a file address. Moreover, the overhang strand section allows each of the files to be separated from each other and allows in-storage operations to take place. These features have been made possible by the single strand having a T7 promoter (which is a sequence of nucleic acid bases) that enables the transcription of information into RNA at the same time, leaving the information stored in the double-stranded DNA.

This work is in its infancy and has only just proven that it is possible to create DNA-based information storage systems that are dynamic and without compromising on crucial functioning areas. Nevertheless, the work now sets a platform to build upon for building the next generation of versatile and high-density data storage devices. The nickname given by the researchers for this system has been DORIS (Dynamic Operations and Reusable Information Storage), so if we start to see a DORIS cropping up in our data storage devices, there’s a good chance it started here.

Nvidia/ARM deal has fallen through, 1,000 jobs at ARM will be cut