Forget petrol, diesel and electric vehicle propulsions systems; the future is hydrogen. The problem is that most of the world doesn’t see it that way…yet. But that could all change thanks to improvements in the hydrogen electrolysis process that creates hydrogen from water.

Why is the prospect of hydrogen so good? The overwhelming environmental advantage is that there are no harmful emissions from the exhaust pipe of a hydrogen-fuelled vehicle.

There are plenty of other positives that kick into touch all other forms of vehicle fuels, but more on those later. There’s also a reason why hydrogen-fuelled vehicles are still not taking pole position in the environmental Grand Prix but before going into that let’s just recap on that opening paragraph statement.

Petrol and diesel engines are dinosaurs despite all the technological changes to make them run more efficiently. Advocates of the diesel engine will argue that its environmentally better than petrol engines because it is more fuel-efficient and you can’t argue with the truth of that.

However, the European Environment Agency stipulates that air pollution is the number one environmental cause of premature death in Europe and air pollution levels are determined by measuring pollutants like ozone, nitrogen dioxide and particulate matter.

Relative to that, it is fair to say that improvements to diesel engine technology have come a long way in an incredibly short time. Compared to the pollutants they used to churn out ten years ago today’s diesel engines are cleaner and more efficient.

Developments in diesel engine technology that actively combat air quality problems include; diesel particulate filters that remove many of the dangerous particles coming from the engine, including extremely fine ones, DeNOx exhaust systems like selective catalytic reduction and NOx traps that help to control exhaust NOx emissions and oxidation catalysts that convert carbon monoxide and hydrocarbons into CO2 and water.

But despite all that, the bottom line is they still pollute our oxygen and let’s not forget the environmental impact of actually manufacturing a diesel engine. They contain over 2000 moving parts, all of which have to be made from Earth resources. An EV has less than half that number.

Another point regarding diesel engines is despite all those meritorious technical improvements to engine efficiency it will all come to nothing over the next decade as 24 European cities will implement bans on diesel vehicles. A large number of countries, including China, are expected to follow suit.

What About Those Hybrids?

Hybrid, the car technology that marries fossil fuel with electricity currently has a role, but it’s not the long-term prospect the world requires.

Quite simply, hybrid vehicles rely on fossil-fuelled combustion engines, and they have to carry heavy electric batteries. This means that trying to calculate their real environmental impact is tricky but whereas many proponents of the hybrid concept point to the improved fuel consumption they offer, opponents of the technology are quick to point out that hybrids offer the worst of two worlds; i.e. fossil fuel emissions and the environmental impact of the battery manufacturing process.

And let’s not forget hybrids also fall into the petrol and diesel-fuelled vehicles category that will be banned in this country from 2035 and even earlier in European countries.

When it comes to purely electric vehicles (EVs), their owners and the hyperbole-trumpeting marketing executives who promote them as the planet’s saviour are merely talking about a damage limitation alternative to existing fossil-fuelled relics.

In reality, EVs plunder planet Earths resources, and because of recycling difficulties and the cost involved in that process, they are not particularly good at giving them back for re-use. And just like the oil needed to feed fossil fuel cars has been the catalyst that has started wars, so lithium could end up doing the same. Even a Pentagon memo states that lithium-rich Afghanistan may become the Saudi Arabia of lithium and it’s not hard to imagine the destabilising effect that could have on the region.

And let’s not forget EVs themselves will eventually have an expiry date imposed on them when eco-friendlier alternatives became viable.

In the meantime, there will be a substantial environmental bill to pay if the world goes totally over to EVs.  Analysts are predicting that by 2040 there will be a global EV population of close to 600 million and in simple terms that means we extend the environmental damage from creating the vehicle to include the electricity-generating power stations that will have to feed electricity to them.

The problem is that globally there are more than 2,400 coal-fired power stations in over 80 countries that produce about 42% of the world’s electricity.

But those aforementioned EV marketing people will argue that green, sustainably produced electricity is on the increase which is true but, paradoxically, the amount of coal-generated electricity is currently at the highest level it’s been for over thirty years.

Not only is this hugely damaging to the environment, but power stations are not particularly efficient entities and generally only manage an efficiency percentage of 64%. And what about the power losses getting the electricity from the power station to the EVs. Losses here can be as high as 12% and so has impacted the environment in creating that electricity it is then thrown away in transmission.

The fact is the wind, and solar power is becoming an increasing contributor to our national grids, but there is no way they alone can feed 600million EVs, especially if on a national basis many of them are plugged in simultaneously for example when people have travelled home from work or when people want to charge overnight for cheap rate electricity.  The power grids as they stand will fail.

So why is it going to be hydrogen-fuelled vehicles that eventually balances mankind’s desire for independent transport against the irreversible damage to the planet if drivers continue to do the head-in-sand ostrich thing when it comes to saying farewell to their favourite ungreen machines?

As previously mentioned, it is environmentally innocuous in terms of emissions and is recognised as the most prolific element on this planet.

Hydrogen cars, in reality, are EVs with hydrogen fuel tanks and are called Fuel Cell Electric Vehicle (FCEVs). The hydrogen provides better performance, increased driving range and re-fuelling times just as fast as topping up a fossil-fuelled vehicle. In other words much quicker than recharging an EV.

Hydrogen can be obtained cleanly by reversing the electrolysis process of water. The problem is that this process of separating H2o molecules to get the hydrogen requires a high amount of energy, making it a costly process.

However, if this energy increasingly comes from renewable energy sources the net energy cycle from the creation of hydrogen, to its use in a vehicle, through to it coming out the exhaust as water ready to be turned into hydrogen again gives a hydrogen-propelled vehicle a meagre score relative to its carbon footprint.

At the moment a standard method of hydrogen production involves separating it from natural gas (steam methane reformation), but work is underway to obtain hydrogen from biomass. This process would significantly cut the life-cycle emissions from hydrogen to around 60g/km CO2. This is below the level that EVs can achieve, even when electricity is created by renewable sources, because of the environmental costs of large-scale lithium battery production.

A further benefit of hydrogen is that it can be produced on local sites rather than at a large facility where it would then have to be transported to local distribution points or supplied through the grid-like network similar to electricity.

What is Reverse Hydrogen Electrolysis?

How do they work? A fuel cell uses a process called reverse electrolysis whereby hydrogen reacts with oxygen in a fuel cell. The hydrogen comes from one or more tanks built into the FCEV while the oxygen comes from... well you know where…the same place we get every lung full. 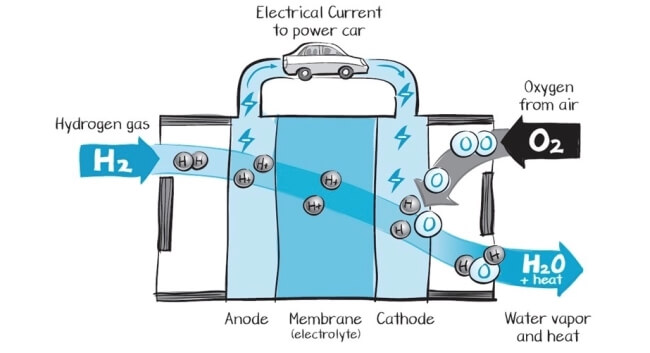 The reverse electrolysis process creates electrical energy, heat and water, which is emitted through the exhaust as water vapour.

The electricity generated in the fuel cell of an FCEV can either flow to the electric motor, thereby directly powering the vehicle or it can go into battery storage until required by the engine.

One crucial environmental advantage relative to FCEVs is the battery which is very much smaller than a typical EV battery. This is because unlike an EV battery, the FCEV battery is being recharged continuously.

All this sounds so environmentally good it begs the question so why aren’t we seeing many more FCEVs on planet Earth’s roads? There are two inhibiting factors. The first is cost. FCEVs are expensive and so is hydrogen fuel and whereas mankind can be very environmentally sympathetic we also know that when it comes to money he can suddenly turn ostrich-like and, bang, his head disappears into the sand again!

The second is where do I buy my hydrogen? To be successful, FCEVs would need a fully viable network of re-fuelling stations and just like EVS still suffer from a lack of those the prospects of FCEVs having them is limited. 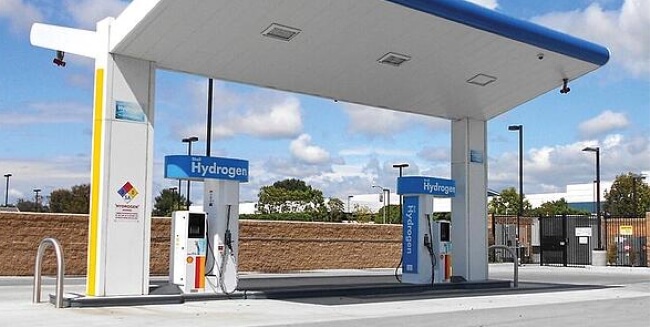 What we have here with both these factors is the well-recognised economy-of-scale scenario. Let’s look at the re-fuelling network thing.

In Europe, Germany is pushing ahead with the creation of an infrastructure for hydrogen fuel cell cars. To promote the expansion of a re-fuelling network in that country vehicle manufacturers like BMW have teamed up with hydrogen producers and filling station operators in a collaboration called the Clean Energy Partnership Initiative which plans to expand the hydrogen fuelling station network to 130 stations by 2022. That would allow the operation of about 60,000 hydrogen cars on Germany’s roads. The next target, with a corresponding increase in fuel cell vehicles, will be 400 stations by 2025.

China has a national plan in place that has a target of 1000 hydrogen fuelling stations by 2030. However, the USA has only 300 hydrogen cars that are mainly in California and only 48 fuelling stations of which over 40 are in California, but it recognises the future potential of FCEVS. The US Energy Information Administration estimates for every one million hydrogen cars; the US will need 200 stations.

If the USA has 10 million hydrogen vehicles, which is the target aimed at by vehicle manufacturers and zero-emission vehicle state mandates, the country will require 2,000 retail fuelling stations which will cost about $1.5 billion in capital expenditures which, when you consider that America’s annual national budget is $3.8trillion, is pretty small beer.

It currently costs about four times that of petrol and so is not cheap, but the economy of scale in production terms would reduce that and so here lies the real conundrum regarding what is undoubtedly an environmentally greener form of vehicle fuel. Until more FCEVs are on the road prices won’t come down, and that won’t happen unless there is a reduction in vehicle and fuel prices to encourage the sale of FCEVS.

That could happen thanks to the electrolysis process. It’s long been known that an electric current will cause the elements of water, hydrogen and oxygen to split to produce hydrogen and thanks to the increase of renewable electricity and the work currently happening to find cheaper metals to do this job hydrogen fuel will inevitably become economical.

The electrolysis reactions needed to generate hydrogen takes place on different electrodes using different precious metal catalysts. And this last factor has been part of the cost problem. Precious metals like the platinum used are incredibly expensive.

However, experiments have shown there are alternatives and work with cobalt phosphide nanoparticles deposited on carbon has been demonstrated to be very useful and importantly has shown it can operate over long periods in adverse conditions. Potentially it is a commercial prospect.

Breakthroughs like that will eventually reduce hydrogen costs and encourage the take-up of a greener fuel.