Last week, a team of researchers demonstrated their method for truly wireless communication underwater. What problems does underwater communication face, and how does the new system work?

When communicating in open-air there are many possibilities all with their own advantages and disadvantages. Radio signals are by far the most common and provide good range with high data rates depending on the frequency used. Light is also another form of communication and is more direct (whereas radio is indirect), meaning it can be made very secure, but has a limited range. Sound is another method for data transmission however it is rarely used, if ever, as air is not a good transmission medium. Sound is also an impractical data transmission method as data rates are incredibly low for audible frequencies with a classic example being cassette tapes used to store information on computers during the 80s; the ZX spectrum, for example, had a baud rate approximately 1300 baud.

While these methods of communication make sense in the open-air, the underwater world is a completely different story. Radio waves that would normally allow for HD streaming of video suddenly become useless as water readily absorbs high frequency radio waves. Frequencies that can travel through water are often far too low for high speed data connections with very long wavelengths; this includes 4G, Wi-Fi, and UHF. While sound still has its data limits, water is a very good transmission medium meaning that sound has a greater range than radio. The last alternative is light which is what a team of researchers have developed.

A team of researchers lead by Basem Shihada (with King Abdullah University of Science and Technology), have developed an underwater truly wireless communication system that allows for data rates high enough for live streaming of video. Depending on the depth of the diver, the system utilises either an LED (down to 10 meters), or a laser (depth undetermined). While water does limit the range of light more than the open-air if a light source can be detected then digital modulation allows for much higher data rates than other methods of underwater communication. The system, known as Aqu-Fi, currently allows for data rates up to 2.11 MB per second (megabyte, not megabit), with a maximum round trip of 1ms. The light source, controlled by a Raspberry Pi, is worn on the back by a diver while a ship on the surface contains a receiver. The ship can then provide internet connectivity either through 4G or Satellite. 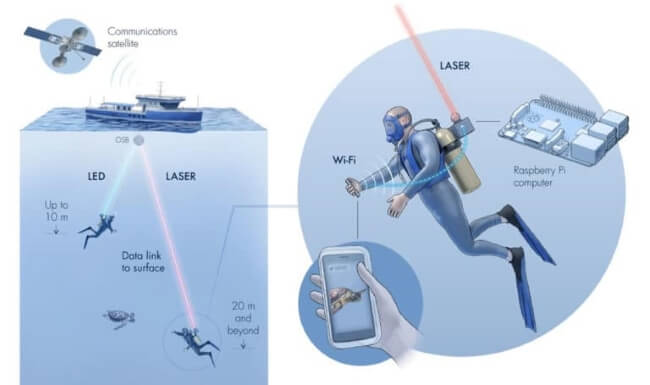 Aqua-Fi would use radio waves to send data from a diver’s smartphone to a "gateway" device attached to their gear, which would send the data via a light beam to a computer at the surface that is connected to the internet via satellite.

“We have created a relatively cheap and flexible way to connect underwater environments to the global internet. We hope that one day, Aqua-Fi will be as widely used underwater as WiFi is above water.” - Basem Shihada

The system is currently unavailable for commercial use as several obstacles have to be addressed. For one, the team are hoping to increase the quality of the link with the use of faster electronics, which allows for higher data rates. The other issue that the team need to overcome is the need for a spherical receiver; when moving underwater the beam will quickly lose connection if not pointed exactly at the receiver. It is hoped that a spherical receiver, like those on PIR sensors, will allow for communication in any direction.