Magnetic field sensors, which are encountered everywhere today across a broad spectrum of industries and end use sectors, are growing in importance. All magnetic sensors work with the Earth’s magnetic field and come in many different types in order to cater for a range of applications that include linear, angular position and rotation sensing. Magnetic field sensors enable ‘white goods’ such as washing machines to run concentrically. And in the automotive sector, they enable headlights to automatically adjust to the correct angle if a car is heavily loaded and to warn drivers and passengers if a seatbelt is not fastened correctly. Other sectors that benefit from magnetic sensor applications include Power Distribution Units (PDU’s); Robotics and Factory Automation; Energy and Water Appliances; and Green Energy.

A few years ago, scientists at Fraunhofer Institute for Integrated Circuits IIS in Erlangen, Germany unveiled a prototype of a high-resolution magnetic line camera to measure magnetic fields in real time. And now, a number of magnetic field cameras are appearing on the market. “Imagine the device not as a camera, but more as a flat plate with a row of magnetic field sensors,” explained Project Manager Klaus-Dieter Taschka from IIS. At the heart of the Fraunhofer prototype device is the HallinOne® 3D Hall-effect sensor that was invented at the Institute. “It enables a sensor chip to detect in all three axes any magnetic field present. These kinds of sensors can solve a range of measurement problems, such as rotation angle sensors, separation and positional sensors, and rpm sensors for instance,” Taschka said. Using the magnetic line camera, it is possible to measure the strength and direction of the magnetic field at 32 positions spaced 2.5 mm apart. The field lines thus become visible along the line over a distance of eight centimetres and can be monitored and recorded. The actual 3D sensor measures no more than 0.1 x 0.1 mm2 in size. This permits point measurements and thus very high measurement accuracy.

At the end of March, Atlantik Elektronik GmbH the technology marketer and design-in specialist for semiconductor products and semiconductor solutions announced that it had made available a 3-axis magnetic field sensor with digital output from Asahi Kasei Microdevices. The AK09970 has a wide measuring range in two different basic settings. The block can also reduce the current consumption to 0.6µA in various operating modes. “This makes it ideal for a wide range of security applications, cameras, smart homes, electronic locks in doors and windows, and much more,” says the company. The device can measure very wide gastric field areas in the µTesla range. The resolution in high sensitivity mode is 1.1µT / LSB. The sensor delivers digital data via I2C or SPI. A corresponding register is set when new measurement data are pending. Intervals of 0.25 / 0.5 / 1/10/20/100 Hz are possible or a simple measurement mode. 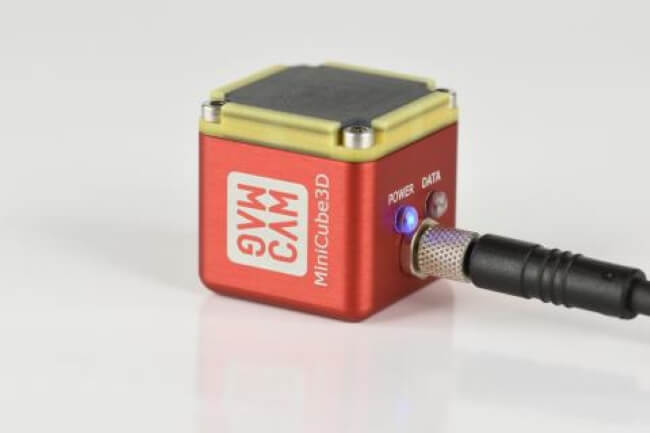 Other Magcam offerings include: The ‘MiniTable’, which features a positioning frame for accurate and reproducible magnet positioning; The ‘HighSpeed Flatbed Scanner’, which allows for the ultrafast measurement of large magnets; The ‘High Speed 3-Axis Scanner’ that enables ultrafast measurement of large magnets and volumes; The ‘High Speed Rotor Inspector’, which enables the ultrafast measurement of permanent magnet rotors; and The ‘MagFit Magnet Analysis Software’, which allows for the additional advanced analysis of uniaxial magnets. In February, the company announced the full release of its fourth generation of portal/combi and rotor scanners that will replace its soon to be phased out third generation scanners. The new generation will allow for additional laser sensor features and applications, increased mechanical stability and a more accurate mechanical fine-tuning of the Minicube sensor. New Magscope software features are included.

Crocus Technology, the California based developer and supplier of magnetic sensors and embedded memory solutions, recently unveiled its TMR magnetic sensor. The CT100 1D linear TMR field sensor is based on Crocus Technology’s Magnetic Logic Unit technology. It is described as a device “with a wide dynamic range that enables it to be used in a variety of applications from contactless current sensing to linear and proximity measurements.” It is said to be an ideal solution for contactless current sensing in that it can measure the current from the induced magnetic field of the current carrying conductor. Zack Deiri, CEO of Crocus Technology explained, “Many applications today demand performance but not at the expense of large deviations due to temperature fluctuation which impacts system performance and safety. The CT100, a discrete TMR sensor with ESD protection, offers superior performance to our competitors’ fully integrated and highly compensated solutions in terms of accuracy and robustness over field and temperature.”

A recent report into the magnetic sensors market forecasts a global market size of $5.86 billion by 2025, having risen from $3.26 billion in 2018 at a CAGR of 8.73 percent. Key drivers are continuous growth in the consumer electronics sector; increasing opportunities in the automotive industry; and a significant role for magnetic field sensors in navigation.