Particle accelerator on a microchip to kill cancer cells

A microchip particle accelerator that pushes electrons to 94% of the speed of light could be used for treating cancer or aiding research in biology or chemistry.

Medical X-ray machines deliver a beam of radiation that is wider than the tumour and patients must wear lead shields to minimize any wider damage to their bodies. With the chip-sized accelerator, electrons could be channelled through a surgically inserted catheter-like vacuum tube to attack the tumour directly. The rest of the patient’s body would be untouched by the electrons. The on-chip accelerator is also expected to be scaled-up to deliver particle beams for experiments in chemistry, materials science and biology. According to the researchers, energised electrons are not used externally as they burn skin.

“The largest accelerators are like powerful telescopes. There are only a few in the world and scientists must come to places like the SLAC [National Accelerator Laboratory] to use them,” said Stanford University professor of electrical engineering, Jelena Vuckovic. “We want to miniaturise accelerator technology in a way that makes it a more accessible research tool.”

The on-chip accelerator was created by cutting a nanoscale channel out of silicon. The channel was sealed in a vacuum and electrons were sent through this cavity. Pulses of infra-red (IR) light were transmitted by the channel’s walls to push the electrons along. Silicon is transparent to IR light. The researchers want to next accelerate electrons to 94% of the speed of light, or 1 million electron volts (1MeV), to create a particle flow powerful enough for research and medical purposes. One thousand channels are expected to be needed to achieve 0.94 of light speed and this chip is planned to be made this year. 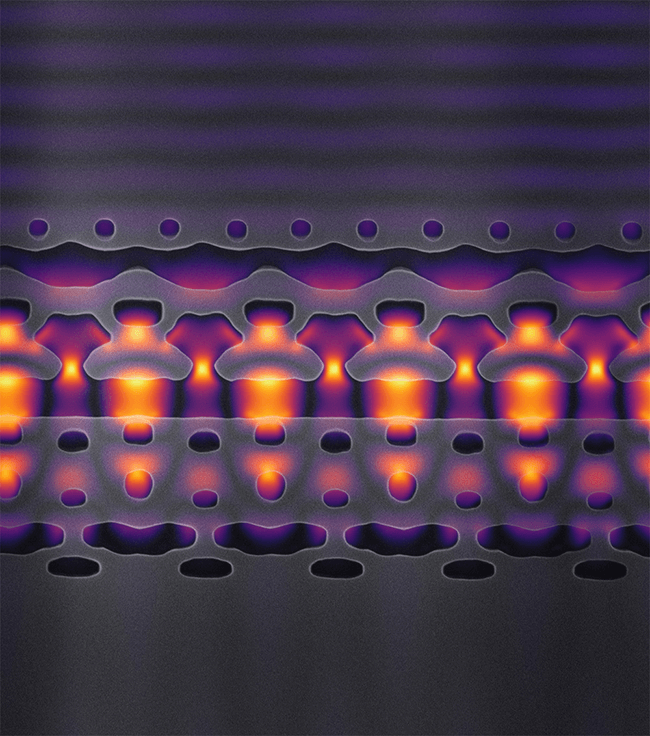 This image, magnified 25,000 times, shows a section of an accelerator-on-a-chip. The gray structures focus infrared laser light (shown in yellow and purple) on electrons flowing through the centre channel. By packing 1,000 channels onto an 25.4 millimetre (inch-sized) chip, Stanford University researchers hope to accelerate electrons to 94% of the speed of light.

The key to the microchip accelerator is the use of IR light and not microwaves, which are typically the method for accelerating particles. The problem with miniaturising a microwave-based system is that microwaves’ wavelengths can measure 101.6 mm (4 inches) from peak to trough, while IR light has a wavelength of a few microns.

It is this tiny wavelength, a fraction of microwaves’ which allows IR light to accelerate electrons in such short distances, compared to microwaves. The pulses of IR light are fired through the silicon to hit electrons at just the right moment, and just the right angle, to push them forward faster and faster. The tiny wavelength is also why a modified silicon chip is needed, the physical features for the IR light and electrons must be 100,000 times smaller than traditional accelerator’s copper structures.

Vuckovic’s team worked out the accelerator channel on a chip design first by specifying how much light energy they wanted the chip to deliver. They then fed that data to an inverse design algorithm which Vuckovic’s team had developed. The algorithm then suggested how to build the right nanoscale structures to bring the IR photons into contact with the flow of electrons to accelerate them.