Electronic devices made of fibres containing interconnected materials that can sense their surroundings, store energy, emit light or perform other actions, could be printed.

The devices can be made by a standard 3D printer known as a fused deposition modelling printer that has been modified with a nozzle that operates at a lower temperature. At this lower temperature, a filament that contains electronics is pushed through the nozzle at a faster rate than conventional printers. Additive manufacturing, also known as 3D printing, builds up a structure using molten material, layer by layer. With a lower temperature nozzle, only the exterior of the filament, which is a polymer cladding, becomes molten so it adheres to the previous filament already laid down.

While the polymer cladding becomes partially molten, the interior of the filament stays cool and solid, with its embedded electronic functions unaffected. The filament is made by assembling the different electronic materials into a larger-scale version which is called a preform. That preform is then heated in a furnace and drawn out to produce a narrow filament that contains those materials in the same relative positions but reduced in size.

Once laid down, the finished filament device can be connected to a power source for functions such as light emission. The devices can use light because "the polymer coating used in our fibres is transparent to detected light,” Massachusetts Institute of Technology (MIT) doctoral student Gabriel Loke explains. “In our work, we used the thermoplastic polycarbonate and cyclic olefin copolymer, both of which have high transparency in the visible light range."

The filament’s electronic components include metal wires, semiconductors for controlling some functions, and polymer insulators to prevent the different parts from contacting each other. The MIT researchers printed a wing for a model aircraft using filaments that contained both light-emitting and light-detecting electronics. For communications applications, flashing lights can transmit data that is then picked up by other fibres containing light sensors. 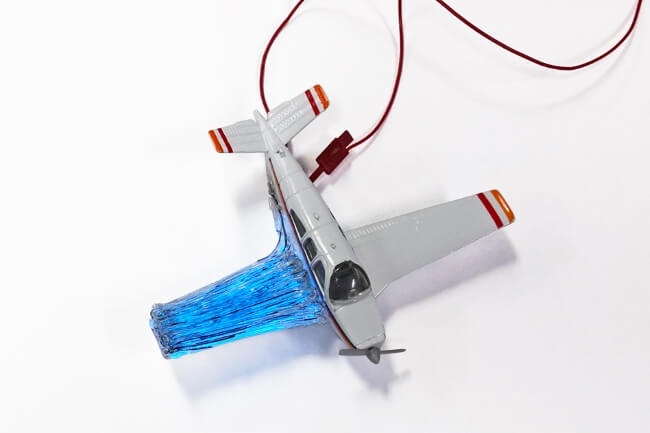 Using the 3D printing method developed by the MIT researchers, a structure such as this model airplane wing could have both light emitters and light detectors embedded in the material so that it could continuously detect any micro-cracks as they begin to form.

Making prototypes was the first application for additive manufacturing, and the filament printer could take this one stage further; they would be functional rather than static models. Beyond prototypes, toy or remote- control aircraft is a possible use, considering the wing that has already been made. An example the MIT researchers give is prosthetic limbs. An entire limb could be printed with all the electronics to monitor and control the limb embedded, while its dimensions and contours would match the patient’s body for a close fit.

Could a nuclear generated electromagnetic pulse kill your car?

Brainmobile. You think it and the car does it. Think again!