The story begins with a clash between Thomas Edison, the greatest inventor of all time, with Nicola Tesla, arguably the father of electrical engineering. Edison had demonstrated the practicality of his electric light-bulb, and in order for the world (or at least lower Manhattan) to enjoy the fruits of his work, a way to power it had to be standardized. Edison preferred DC, Tesla argued for AC.

The problem with DC was, at that time, it was impossible to efficiently convert high voltage DC to low voltage DC, or vice versa. AC could easily be converted, with the same type of magnetic transformers that are still so widely in use today.

1- Why is Converting High Voltage to Low Voltage so Important?

1,000 volts is, and was, far too high a voltage for non-professionals to deal with, and 110 volts was chosen in the US and 230 volts in Europe. So why not just have the power stations just belt out either of those voltages?

In the simplified example below, let’s assume the power line presents R ohms, and compare the losses transmitting 100 volts at 100 amps versus the losses we see at 1,000 volts at 10 amps

2- How Much Power Is Wasted In High Current Transmission?

So, for over a century, much to Edison’s chagrin, the lion’s share of the world’s electrical power was transmitted as AC.

3- What is Pulsating DC Voltage?

If you were able to turn a DC voltage on and off in a periodic manner, you’d have pulsating DC, as illustrated below.

The reason why pulsating DC is so important to our story is that, in a manner similar to that for AC power, transformers can step up or step down pulsating DC power. Until very recently, it was impossible to do this without a tremendous loss of power.

In a word – Semiconductors! There are now semiconductor devices, such as insulated-gate bipolar transistors (IGBT) and Thyristors, that that can switch on and off many times per second with virtually no losses. More recently, purely silicon-based devices are being replaced by low-bandgap semiconductors built with Gallium Arsenide (GaAs), Gallium Nitride (GaN) and Silicon Carbide (SiC). These can handle even more power with even more efficiency.

5- The Drawbacks of AC Power Lines

We now know that for either AC or DC, long-distance power lines must transmit power at low current and at very high voltages because of the power wasted by either modus in high current transmission. But, as illustrated below, at long distances even at 400,000 volts, AC power lines, still waste far more power than do DC power lines. - Why? 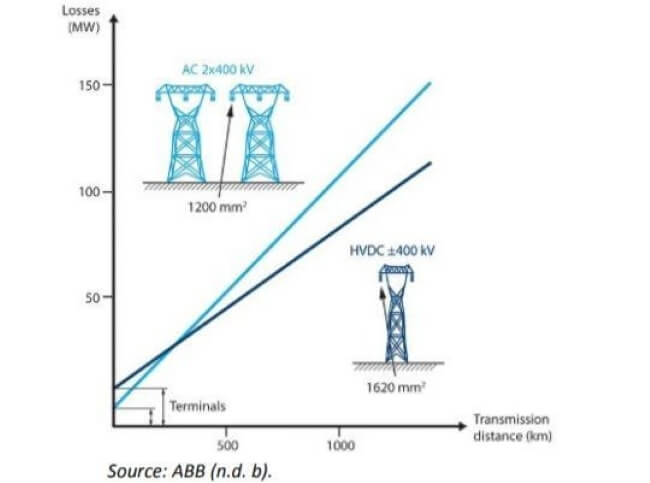 This phenomenon occurs when AC voltage flows through a wire. It is absent in DC transmission.

For AC power conduction, the greatest current density occurs only on the surface of the wire conductor, while the core transmits very little of the power at all. Because most of the current pass through less of the wire’s area, electrically speaking, the cable is hollowed out, and less of the cable is doing any electrical work. And, because a “thinner’ cable offers more resistance than thicker a one, the same line will offer more resistance to AC power than to DC power.

7- Asynchronicity and the Smartgrid

As we advance toward smartgrid technology, different sources of power generation must be able to interconnect. The picture below illustrates two asynchronous AC power sources:

DC power is immune to this problem. So, even if the power lines are HVAC and not HVDC, conversion to HVDC will be absolutely necessary in order for disparate AC sources to work together on a smartgrid.

An HVDC power line requires only two physical cables, while a HVAC line requires six. As implied in the previous section’s illustration, this can mean two transmitting towers for HVAC as opposed to one for HVDC.

The nature of submarine cables is such that they present high parallel capacitance over distance.  A “capacitor” only reacts to electrical signal during times of change, which is happening constantly with AC, and only during switch on and switch off for DC.

This will have the effect of sapping a large portion of AC power transmitted over underwater cables, but only effect HVDC during turn on and turn off.

In the representation below, the brown line is a DC signal, and the blue line is an AC signal.

Even though the AC power peak is equal to the DC steady state, it is a well documented fact that the average power carried via the AC line is only 71% of that carried by the DC line.

However, the AC cable must be rated for the peak power, even though it carries only 71%. This is a tremendous waste inherent in all HVAC power lines.

7 Things You Need To Know About Artificial Photosynthesis

A quick start for the Genuino 101 development environment

Should Ethernet replace CAN? Why Old Technologies are Hard to Replace