What is 3D Printing (Additive Manufacturing)?

Additive manufacturing at volumes that are useful for mass production is the goal for a 3D printer that uses artificial intelligence and optical coherence tomography to increase output and quality.

Additive manufacturing, also known as 3D printing, has been used for rapid prototyping for many years and more recently for producing small batch manufactured parts for the likes of the aerospace industry; which is not a mass-production business. The speed of printing, the materials used and the number of materials that can be printed at any one time, along with difficulties in in-process quality control, have limited the user base of 3D printing.

A 3D printer that can use a wider variety of materials and chemistries, which uses AI and the scanning technology, optical coherence tomography, to control the process performance for greater productivity is now being offered. This 3D printer is being developed by Massachusetts-based company Inkbit. The company has one operational production-grade printer and wants to sell printers next year. It plans to begin selling printed products this year and has a pilot project with healthcare company, Johnson & Johnson.

“The company was born out of the idea of endowing a 3D printer with eyes and brains,” says Inkbit co-founder and chief executive officer, Davide Marini. "Our machine is the first one that can learn the properties of a material and predict its behaviour. I believe it will be transformative because it will enable anyone to go from an idea to a usable product extremely quickly." 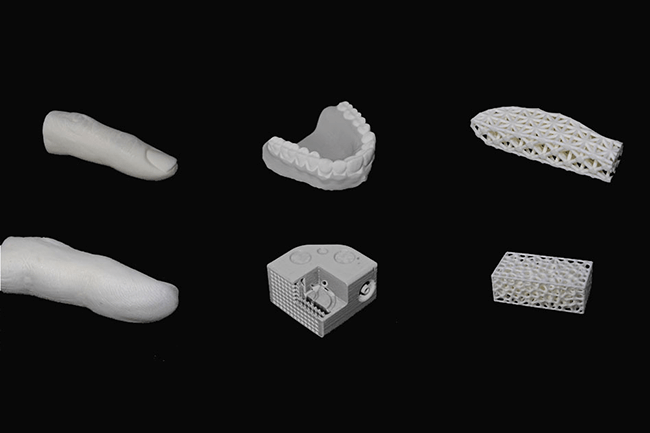 Inkbit, a startup out of MIT, has created a multi-material 3-D printer capable of printing extremely flexible materials more accurately than competitors, according to the founders. Credit: Courtesy of Inkbit

The Inkbit 3D printer is an inkjet which can print multiple materials at the same time. It uses AI and optical coherence tomography (OCT), which scans each printed layer, to detect errors that can be corrected in real-time. The OCT scanner uses long wavelengths of light to see through the surface of materials and scan layers of a material at a resolution of a micron. The company’s OCT scanner is custom-made so, Inkbit says, it is 100 times faster than any commercial system.

The Inkbit printer has 16 print heads to create multi-material parts and can print objects as large as a fist at a rate of hundreds of thousands per year. According to the company, the machine’s contactless inkjet design means there are no insurmountable obstacles to increasing the size of the products later.

The AI, machine-learning system, uses the scan data to predict the printing materials behaviour to create more accurate final products. Inkbit also makes the claim that the 3D printer’s accuracy means it can print around objects placed in the print area, such as microchips or other electronic components. Once finished, the printer can retain a digital recording of the object it printed, which can be used for the quality assurance of future batches.