Micro cracking from heat induced material distortions which damages electronics could be diminished by using a compound that shrinks uniformly in all directions when heated.

Heat damages electronic components when the materials they consist of expand at different rates and this causes cracking which ultimately leads to failures. Plastic components and circuit boards are also vulnerable to heat damage because their volume also changes during heating and cooling cycles. Researchers at Nagoya University in Japan have created a compound, a material, which uniformly shrinks in all directions when heated. This material is samarium monosulfide which has a small amount of cerium added. This compound has what the researchers call, a negative thermal expansion characteristic; meaning it shrinks when heated.

"What is important for many engineers is the ability to use the material to reduce device failure due to thermal expansion," said Nagoya University magnetic materials engineering researcher, professor Koshi Takenaka. The researchers think that a material, such as samarium monosulfide, when incorporated into components, could relieve some of those heat induced stresses and increase the component’s lifetime. 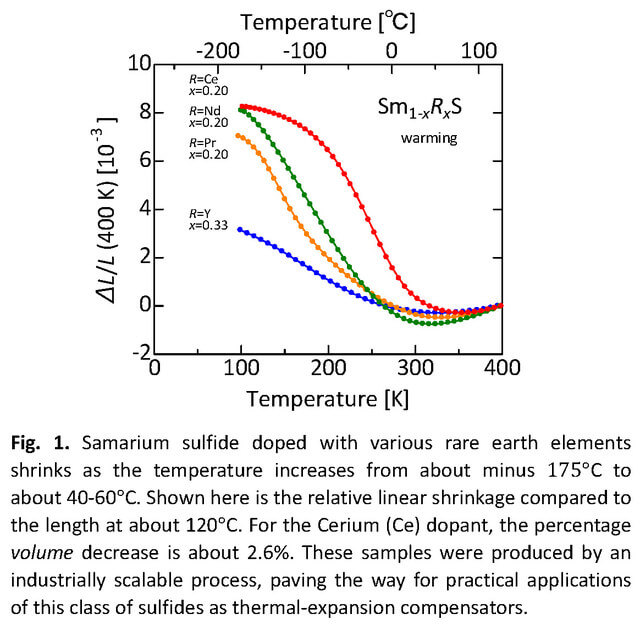 The compound’s negative thermal expansion characteristic works because the materials’ crystal structure stays the same, but its atoms move closer together. The researchers think that the crystal structure becomes smaller as the samarium atoms’ electron structure changes, shrinking them. Electrons within the atoms move into new positions which enables this new compact structure.

Materials with negative thermal expansion have been known of since the 1960s, but the temperatures within which they exhibited that shrinking behaviour were beyond typical heating conditions. Another problem was that these early materials would not shrink uniformly in all directions either, so the materials only last for a few heating and cooling cycles.

To overcome this nonuniform change and to bring the temperature range into something that was useful the Nagoya researchers had to find a way of tuning the material, so it shrinks at more useful temperatures. The team's solution was to replace a very small proportion of the samarium atoms with another rare earth element, essentially doping the monosulfide. Cerium is the preferred choice as it is plentiful, but other rare earth elements neodymium, praseodymium and yttrium can also be used.

When this monosulfide compound is heated, it not only shrinks, it changes colour from black to gold. The various rare earth versions of this monosulfide demonstrated a negative thermal expansion of up to 8% at ambient pressures, which the researchers say is significant. The compounds also have a useful range of temperatures including room temperature and above.