DLP vs LCD vs LED vs LCoS vs Laser: Shedding Light on Projector Technology

Projectors aren’t exactly new. Existing in a variety of forms, from 35mm film projectors to slide projectors and even overhead projectors, these devices offer a means of casting a large image on virtually any surface. Digital projectors come in various forms, and with increasingly affordable projectors, they have seen further adoption outside classrooms, theatres, and conference rooms. But like panel televisions which range from LCD and LED to plasma, projectors utilise different projection technology. Learn about DLP vs LCD vs LED in projectors!

DLP vs LCD vs LED vs LCOS: Shedding Light on Projector Technology

In the world of digital projection, there are four main projector technologies: DLP, LCD, LED, and LCOS. DLP stands for Digital Light Processing which employs a chip comprised of microscopic mirrors and a spinning colour wheel to generate an image. LCD projectors opt for liquid crystal displays rather than physical moving parts, as you’ll find in DLP projectors. LED projectors, or light-emitting diode projectors, are a bit of a different breed. These are either DLP or LCD technologies but tout LED light sources. LCoS, on the other hand, stands for liquid crystal on silicon and is a sort of DLP-LCD hybrid which uses liquid crystal chips and a mirrored backing. Then, there are laser projectors which differ from lamp-based projectors by opting for a solid-state laser rather than a lamp for its light source.

What is a DLP Projector, and What are the Benefits of DLP Projection? 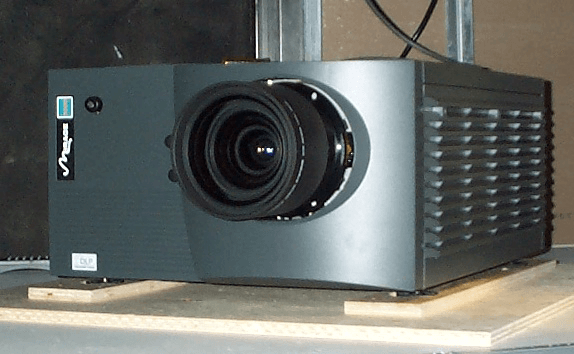 A DLP, or digital light processing, the projector uses tiny mirrors, which in turn reflect light toward a screen. There’s typically a physical colour wheel, which is a literal spinning wheel full of colour filters used to generate sequential colours. These can be found as single-chip DLP projectors or three-chip DLP projectors with red, green, and blue DLP chips. Prices vary from a couple hundred pounds to tens of thousands. DLP projectors are easily the most common, with most home theatre projectors utilising DLP technology.

Light output on DLP projectors tends to be robust and suitable for atmospheres with ambient light, such as classrooms and conference rooms. Likewise, colour accuracy, while varying quite a bit by device, often shines with DLP projectors. Motion blur isn’t a huge issue on most DLP projectors, with crisp, sharp images during fast-motion sequences in action flicks and sports. However, DLP projectors may be plagued with rainbow artifacts where bright objects may give off the appearance of a sort of light trail. This doesn’t affect three-chip DLP projectors, but single-chip DLP projectors might experience artifacting.

What is an LCD Projector, and What are the Benefits of LCD Projection? 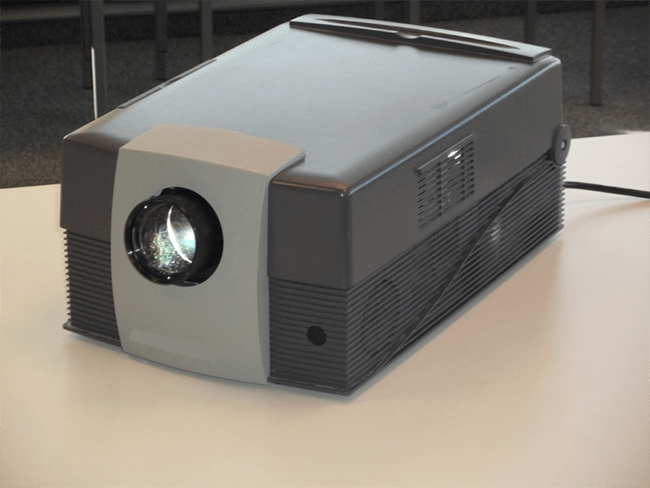 While LCD, or liquid crystal display, technology is common in TVs and computer monitors, it’s also popular in the projection space. LCD projectors feature three LCD panels which cast an image using a primary colour: red, blue, and green. All three are simultaneously projected to display the resulting image in its full colouring. Price varies quite a bit, from a few hundred to the upper thousand.

Generally, LCD projectors are pretty inexpensive to operate since they eschew moving parts. Lamp life is generally much higher than with DLP projectors. Colour accuracy is top-notch, and there’s pretty low power consumption. Black levels shine, and light output or lumens can be pretty high. Rainbow artifacts are kept to a minimum, though motion blur may be an issue.

What is an LED Projector, and What are the benefits of LED Projection? 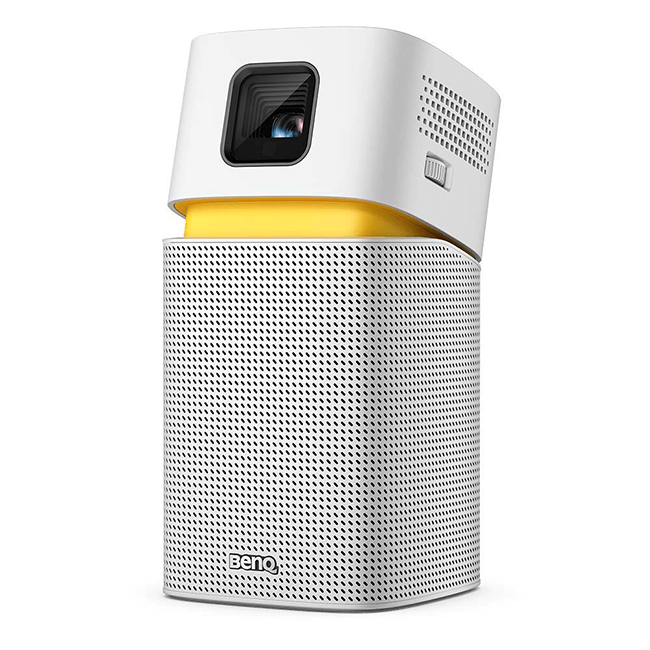 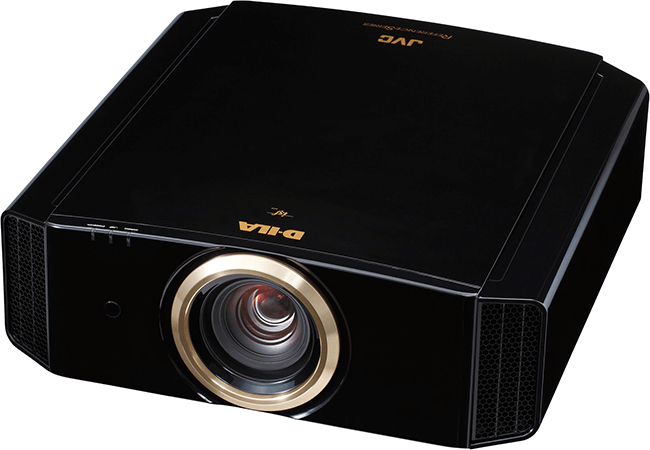 LCoS, or liquid crystal on silicon, arrives as a sort of LCD-DLP fusion. At its core, LCoS employs liquid crystal chips with reflective backing similar to DLP. However, an LCoS projector passes light through LCD panels which is then modulated by liquid crystals. Therefore, it’s at once a reflective technology and one which opts for LCDs rather than mirrors. There’s extremely high resolution, and SVGA LCoS projectors don’t even exist. Yet this comes at a cost: weight. The lightest LCoS projectors clock in a bit over 10 pounds. DLP, LCD, and LED projectors are far more portable. The likes of JVC and Sony use proprietary LCoS tech, D-ILA and SXRD, respectively. I’ve got a hulking Sony VPL-VW60 home theatre projector with LCoS technology onboard, and, while not nearly as portable as my ZTE Spro2 or BenQ GV1, the VPL-VW60 delivers top-tier image quality with lush colour reproduction and gorgeous black levels. Usually, the price is a bit higher, mostly in the thousands. 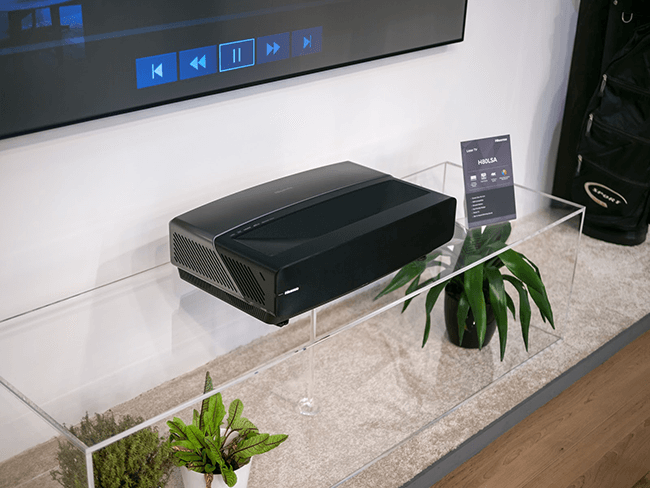 Traditionally, lamps provide a light source for projectors, and this remains true of DLP, LCD, LED, and LCoS projectors. However, lasers are beginning to replace lamps in projectors and may be the future of projection. Image quality is fantastic, arguably trouncing even LCoS, and lasers last longer than even energy-efficient LED bulbs. Moreover, lasers are more durable than traditional projector bulbs, delivering almost instantaneous on-off functionality. Like an LED projector, a laser projector still uses an LCD, DLP, or LCoS chip and speaks of the light source rather than the projection technology itself.

While a standard bulb-centric projector uses RGB lighting to reproduce colours on the screen, a laser projector instead generates the precise colours needed for a picture. As such, it’s more energy-efficient, and this even allows a laser projector to get extremely bright, far brighter than DLP, LCD, or LCoS units. Ok, so what’s the catch? Price. Laser projectors are costly, retailing for several thousand at minimum.

DLP vs LCD vs LED vs LCoS vs Laser: Shedding Light on Projector Technology

Ultimately, selecting a projector depends on several factors, notably budget. DLP, LCD, and LED projectors are pretty common and vary from sub-$100 budget projectors to several thousand dollar devices. LCoS boasts videophile-calibre image quality at the expense of cost. Laser projectors present the best image available from a projector but are too costly for mainstream adoption.

Researchers Create Photo-Sensor that Behaves like the Human Eye