A new type of flexible and extremely thin bipolar plate is expected to make battery manufacture more cost effective, helping to commercialise the technology for mobile power supplies for domestic and industrial use and eventually to power electric vehicles.

Battery systems are based on a series of interconnected individual cells which can have disadvantages in terms of efficiency and manufacturing productivity and costs. Each cell is a battery in itself consisting of two electrodes, the anode and cathode and an electrolyte. Bipolar plate is a different way to connect individual cells in a battery pack. It is the interconnection of individual cells that make conventional battery systems very complex, where several hundred of these cells are connected with wires. Connecting all these cells is time consuming and can lead to wires becoming too hot during the routine discharge of power.

By connecting the individual cells using flat bipolar plates, these hot spots and complicated wiring can be avoided, say researchers. A drawback that has existed has been due to the weight and thickness of the plates, compared to wires. This is because the plates were made of metal, which also made them heavy and susceptible to corrosion, or they cannot be thinner than several millimetres when they are made of a carbon-polymer composite because of the injection moulding process used.

To create a light weight, flexible, very thin, corrosion resistant and easy to manufacture bipolar plate, “we use commercially available [electrically conductive] polymers and graphites, but the secret is in the recipe,” says Fraunhofer Institute for Environmental, Safety and Energy Technology (UMSICHT) department head Anna Grevé. That recipe includes graphites and polymer, an 80%, 20% mix, respectively. “We can produce very thin plates and – compared with conventional cells connected by wires – saving over 80% of the material used. We can make plates that are so flexible that you can wrap them around your finger, as well as ones that are completely stiff,” she adds. 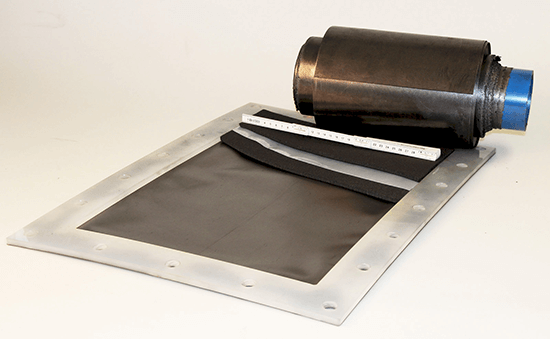 Grevé expects the initial applications for this new type of bipolar plate is for large battery installations that are temporarily installed, mobile energy systems, that can distribute power to a community, for example. But she also can foresee a flexible battery connection system being used for electric vehicles. To illustrate the benefit of a bipolar battery, Grevé uses the example of the Tesla motor car company battery, which she says has more than 7,000 individual cells with each one having to be connected. “This type of [bipolar] battery might offer other opportunities. That application [electric vehicles] needs to be evaluated, definitely,” she added.

The requirements of any application will determine the size of a battery and whether it can be used in a car or statically will, “highly depend on the chemistry you’re using,” explains Grevé. Her team of researchers at UMSICHT in Oberhausen, in North West, Germany, opted for the roll-to-roll technique, which they say allows for cost-effective manufacturing. The project was funded by the German Federal Ministry for Economic Affairs and Energy.