You've probably heard of graphene, the carbon-based material that is vital to the development of quantum computing.

But did you know that it has other applications? Beyond the world of semiconductors, graphene, and its cylindrical guise of Carbon Nano-tubes (CNT) have proven valuable in fabrication industries.

Graphene has even been used to clean up environmental disasters and has military applications.

While the future promises graphene-based processors boasting the power of quantum computing, the devices they reside in might also rely on graphene.

Most significantly, CNTs can be used to create lightweight, strong structures. These can be fabricated to almost any design and used in several previously challenging locations. For example, graphene is not affected by rust, meaning it can be used as a coating on seagoing vessels to reduce maintenance. Of course, a rust-free material can also be used in underwater structures.

Graphene makes the perfect material for sensors, as every atom is exposed to the immediate environment. This means that it can detect and report changes, making graphene ideal for chemical sensors, atmospheric sensors, biological sensors and even stress monitoring in construction.

Remarkably, graphene can also improve the manufacture of industrial lubricants. Sweden-based Applied Nano Surfaces launched one of the first graphene-enhanced low-friction coatings, Tricolit GO. This is applied as a spray or in bulk with ANS claiming graphene increases abrasion resistance tenfold.

Cleaning Up with Graphene 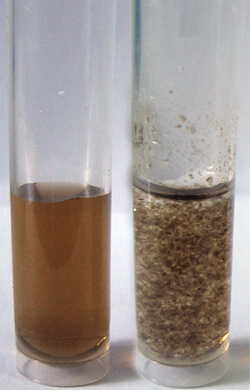 The list of graphene's industrial uses isn't limited to manufacturing. Graphene oxide has been discovered to have the ability to clean contaminated water of radioactive material. Researchers at Rice University and Lomonosov Moscow State University discovered that flakes of graphene oxide are attracted to radionuclides, resulting in them being solidified for easy removal.

Graphene's clean-up capabilities go further. The material has been demonstrated to be capable of sieving salt from seawater, useful in famine areas. Graphene is even set to revolutionise the water treatment industry.

Cleaning up after ecologically disastrous oil spills has long required quick action and dangerous chemicals to disperse crude oil. Thanks to the development of white graphene scientists have created a "super sponge" to absorb spilt oil. The ramifications of this for oil clean-ups are considerable.

Inevitably, graphene has been identified as a material with military applications. While sensors, lubricants, anti-rust coatings, will no doubt come in useful, the incredibly lightweight material has been employed in temperature-regulating fabrics.

Graphene can also perform twice as well as Kevlar in the manufacture of bullet-proof vests and body armour.

Stealth is also a property of graphene. Research by the University of Michigan found that CNTs absorb radar, with suspension in paint likely to add stealth capabilities to existing craft. Since that research was completed, it seems likely the radar absorbing properties of CNTs have been further explored by Lockheed and other contractors.

Graphene and Carbon Nano-tubes are the material of the future, today.