Over several years, high-power LEDs have made rapid advances as far as power and raw luminous output are concerned. Solid-state is now firmly established as the technology of choice for ambitious indoor and outdoor lighting applications. This year, we have seen the conversion of no less a location than St. Peter’s Square in Rome, which is now lit by over 130 luminaires containing Osram neutral white LEDs. Could this be the ultimate blessing for LED lighting? 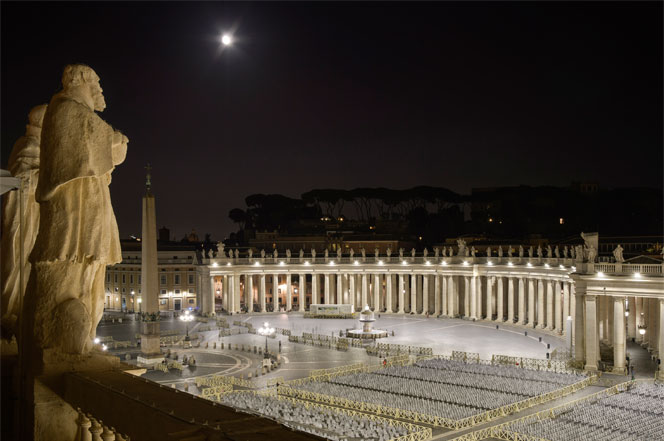 We can expect ever more powerful emitters to continue emerging from the laboratories of the leading manufacturers, if for no other reason than to claim kudos as King of the Hill. For some time now, however, emphasis has been shifting towards optimising device performance to meet other practical economic and aesthetic considerations.

Throughout 2016 we have seen continued emphasis on improvements in efficiency in terms of lumens per square millimetre, as well as lumens per Watt. This is important, as lighting manufacturers now look to improve subsequent generations of currently successful products: newer, better devices within the same footprint as their predecessors allow new products to be introduced quickly and cost-effectively without requiring major redesign. Cree introduced the latest generation of its benchmark high-power XP-L emitter in September, raising lumen output and efficacy (lumens per Watt) by 7% and 15% respectively. Reflecting the value placed by industry on area efficiency, the Illuminating Engineering Society of North America Progress Committee praised three LEDs from Osram’s Oslon and Durius families for delivering a combination of high output and small footprint.

As well as the latest generations of packaged LEDs such as Cree’s XP-L and Lumileds’ Luxeon Core and Compact Chip On Board (COB) devices arrived to help designers take their products to the next level easily, 2016 has also brought important advances in the development of package-less LEDs. Seoul Semiconductor became the first supplier to enter mass production of package-less devices, with its WICOP family. These devices promise to save cost and footprint by eliminating package components such as a lead-frame and bond wires. With WICOP, Seoul Semiconductor has perfected a way of enhancing luminous efficacy of package-less emitters: the devices achieve higher lumens per Watt than either conventional packaged high-power LEDs or alternative chip-scale package devices.

Focus on Quality and Colour

With growing confidence in the ability to illuminate large areas, either indoors or outdoors, designers and specifiers are increasingly directing their attentions towards the quality of illumination. The IES published the TM30-15 colour-quality metric towards the end of 2015, which helps designers assess the rendering of a wider range of colours more accurately than is possible using the traditional Colour Rendering Index (CRI) that expresses average colour fidelity in comparison with an ideal light source.

Although CRI can be manipulated to achieve an artificially high score, its strength lies in its simplicity. It is still not clear whether the significantly more complex TM30-15 will be widely used, or even well understood, throughout the industry. However, component producers and lighting designers are coming to terms with the ability to customise light in ways that have not been possible in the past, and this is creating new opportunities.

One of these is horticultural lighting, and in the past months, major LED manufacturers have introduced products aimed directly at this sector, including the Lumileds Luxeon SunPlus and Cree XQ-E and XP-E families. These devices are optimised to produce spectra that are known to maximise photosynthesis. This enables growers to combine superior, LED-optimised lighting with existing indoor-farming expertise covering aspects such as temperature and atmospheric carbon-dioxide to further shorten the crop-growing season while also optimising flavour and yield. And, of course, there is the added attraction of lower utility bills thanks to the known efficiency advantages of LED lighting. As global food demand continues to increase with rising population, here is one way technology can help to meet the important challenges facing future generations.

The success of horticultural LED lighting is one example of how the controllability of LEDs can deliver extra value in specific applications. A tougher challenge, and potentially an even greater opportunity, is to increase understanding of human-centric lighting and deliver new products that fully exploit the controllability of LEDs to benefit human health, wellbeing and productivity.

LED lighting has always been closely associated with the smart lighting revolution, and for much of the year the industry has been excited by the promise of the new Bluetooth® mesh profiles. These should enable end-users to control lights throughout a large area, such as an entire house or even an office or factory, directly from their smartphone when in Bluetooth range of any node in the network. The Bluetooth SIG assigned a working group in 2015 to look at various proposals; publication was anticipated in 2016, but so far this has not been announced. As and when it arrives, the official Bluetooth mesh standard may not contain many surprises, as it is widely expected to be based on the CSRmesh™ technology currently powering networkable Bluetooth radios such as CEL’s MeshConnect™ modules.

As integration of LED lighting within smart networks is to become easier, integration with the building’s power infrastructure could also benefit from some simplification. Implementing circuitry for AC/DC and voltage conversion in each individual fitting adds expense and wastes energy. Power over Ethernet is one option that could help minimise power-conversion losses and save costs, which has the added advantage of carrying power as well as control signalling over the same network cable.

2016 saw the arrival of Distributed Low-Voltage Power (DVLP). Like PoE, DLVP comes within the class 2 power limits of 100 Watts and 60V. While PoE is arguably better able to service smart lighting as a part of the IoT, DLVP – provided it becomes an open standard – could help significantly reduce lighting installation costs while maximising the inherent energy-saving advantages of LED lighting; which, if we can all cast our minds back far enough, was the reason the technology first gained widespread attention.

Apple to be Fined Again for Batterygate