The lion's share of mobile data traffic occurs inside buildings. The high density of subscribers in buildings makes it especially important to ensure the best possible network quality. In order to plan, implement and optimise in-building wireless networks, a reliable and comprehensive assessment must first be made of the radio channel quality of all prevalent networks. Extremely lightweight and compact drive test scanners are ideal for this purpose. A backpack system is even available that can measure all relevant standards in parallel, thus minimising measurement time.

Since smartphones and tablets reached the mass market, the use of mobile broadband data services has been rapidly increasing. In 2012 alone, the global mobile data volume grew by 70%; the bandwidth required in wireless networks is expected to continue to increase. Industry giant Cisco is forecasting continued growth of 66% annually over the next few years1.

Network operators have been forced to respond to this trend and are further expanding and optimising their networks. When doing so, they rely on a variety of strategies:

To improve network quality, operators, infrastructure manufacturers and service providers need a mobile test solution that allows a tester to move through indoor spaces unencumbered by bulky equipment in order to obtain a comprehensive picture of the quality of available wireless networks as quickly as possible. In Europe, for example, this includes UMTS and GSM in the 900 MHz band and LTE and GSM in the 1800 MHz band, plus UMTS again in the 2100 MHz band and LTE in the 2600 MHz band. The measurement bandwidth of the drive test scanner should cover all of these frequency bands and also be capable of measuring in parallel all wireless standards used in an individual band. As an example, the R&STSME scanner from Rohde & Schwarz offers a measurement range of 350 MHz to 4.4 GHz. This means that it covers all bands specified for wireless communications standards. In each band, it can simultaneously measure any combination of signals from different wireless communications standards. Depending on the level of network expansion, it flexibly adapts to the network configuration. 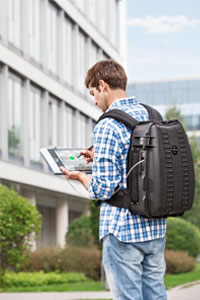 The R&STSME drive test scanner from Rohde & Schwarz weighs only 650g. This makes it possible to fit four scanners in the R&STSME-Z3 backpack system for measurements in 4 × 4 MIMO systems, for xample.

When planning an additional LTE network for a frequency band in which a UMTS network is already operating, for example, the prevalent propagation conditions must be measured. This data can be used to fine-tune the propagation model used in the LTE planning tool (model tuning). Since the UMTS network cannot be turned off for these measurements, a scanner with a high dynamic range is required to detect the signal of a distant radio cell in the neighboring cell's coverage area.

The shutdown of analog TV channels has made new frequency bands available for wireless communications worldwide. Network operators first need to gain experience with these bands to be able to utilise them optimally. The introduction of LTE in the 800 MHz band, for example, has shown that this band differs significantly from the 900 MHz band. Its lower frequency significantly expands the range of LTE 800 wireless cells. This increases the risk of interference, which can occur when too many neighboring cells are received too strongly (pilot pollution). To prevent this, the LTE network must be planned differently than in the 900 MHz band. Base stations are positioned further apart to take the larger cell radii into account. As a result, not all existing sites will continue to be used for LTE 800.

The use of LTE and MIMO increases the spectral efficiency of a wireless network. LTE is based on orthogonal frequency division multiplexing (OFDM) and can therefore be flexibly deployed in different bandwidths. With 64QAM modulation, data rates up to 75 Mbit/s can be achieved in a 20 MHz channel. Under good channel conditions, MIMO can double the data rate without increasing the bandwidth. However, this requires an appropriately optimised network. The network operator can use a scanner during drive tests to determine whether and where there are problems with the radio transmission. Interference measurements are typically performed at the same time. 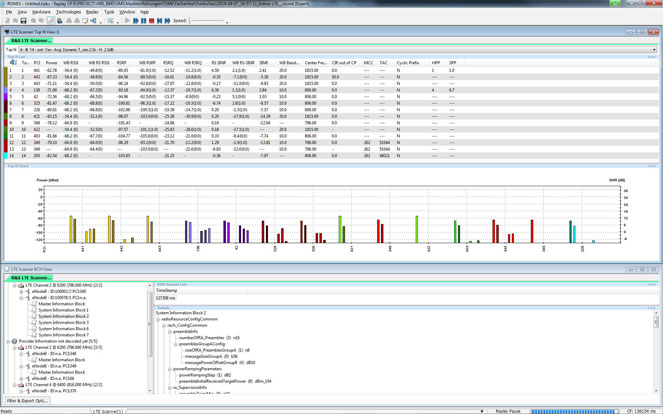 Even externally induced interference, such as from defective set-top boxes, strong TV transmitters or faulty cable TV lines can be detected with scanner measurements. The network operator or regulatory authority can then take action against the interference source. Assessing the channel quality of LTE MIMO additionally requires special MIMO measurements that the operator can use to optimise the network.

Up to four scanners must be cascaded in order to measure the data streams of the individual channels in MIMO systems. A variety of network configurations ranging from 2 × 2 MIMO to 4 × 4 MIMO should be supported.

The LTE-Advanced carrier aggregation mode makes it possible to increase the maximum data rate by combining several LTE cells. These cells generally lie in different frequency bands. In order to assess the quality of all radio channels being used, scanners must have a sufficiently large measurement bandwidth.

The greatest volume of data in wireless networks occurs in buildings. Buildings have the highest subscriber density and the highest data service usage. This is why network operators use dedicated infrastructures such as microcells, picocells and distributed antenna systems (DAS) in airports, train stations, trains, event venues (exhibition halls, sports stadiums), shopping centers and office buildings. 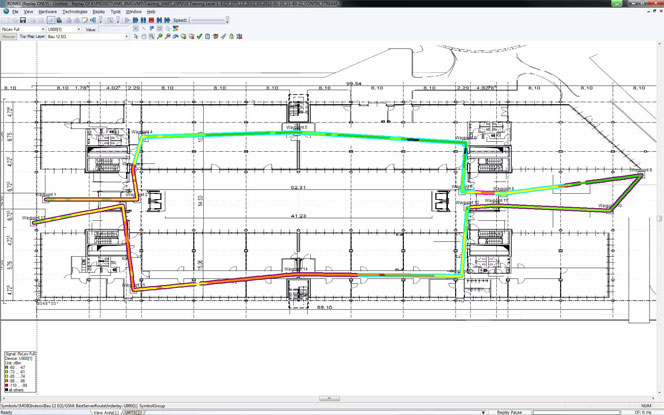 Recorded readings from the R&S TSME-Z3 backpack scanner on a map.

Operators increasingly supplement these small-cell networks with WLAN hotspots to reduce the load on wireless networks (Wi-Fi offloading). Scanner measurements are essential for planning, commissioning and optimizing this infrastructure. When planning an in-building network, test transmitters help to determine the signal propagation. After the network has been set up, scanner measurements are used to check the coverage. The high cell density in buildings leads to increased interference. For this reason, network optimization is essential for standards such as UMTS and especially LTE, because it is usually not possible to reserve a specific frequency band for microcells and picocells. 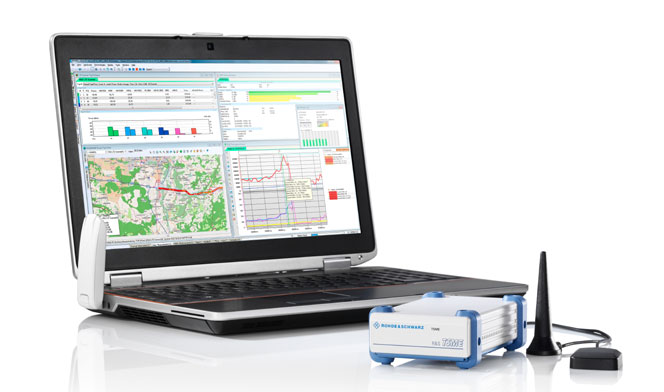 A complete test system with the R&S TSME and R&S ROMES measurement software.

When selecting a drive test scanner for in-building measurements, network operators should pay special attention to size and weight. The measurement system must also be capable of measuring all wireless communications standards in both current and future frequency bands. If MIMO measurements are involved, an important feature is the ability to cascade multiple measurement instruments. The R&S TSME-Z3 backpack system from Rohde & Schwarz is optimised for this scenario.

Jordan Schilbach is part of the Product Management for Wireless Network Optimisation team at Rohde &amp; Schwarz in Munich, Germany.

The Future of Bio-Informational Engineering

PowerPoint somnolence - there is a cure