5 things you need to know about SFP+ and QSFP

SFP+ is now the most popular socket for 10GE systems

Demand from the communications industry for increased data rates and bandwidth has led to the development of new form factors for pluggable transceivers, such as SFP+, an enhanced version of SFP.

SFP+ shares a form factor with SFP (with a higher port density than other form factors such as XFP), so it means that some legacy SFP designs can still be used with SFP+. However, SFP+ modules only convert optical signals to electrical signals, in other words, they don’t do clock and data recovery. These tasks must be done by the host board. 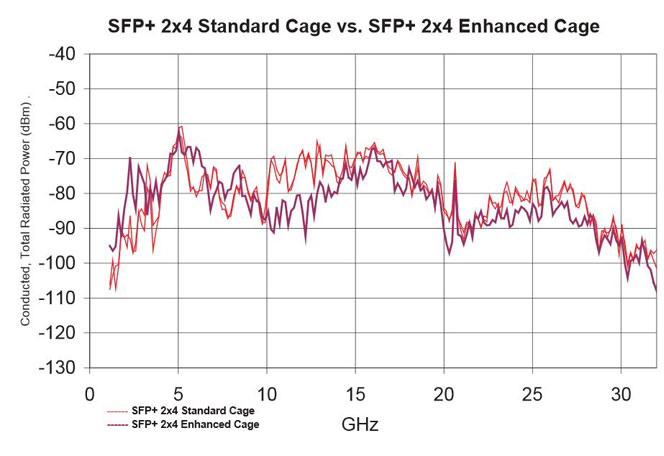 There are also QSFP and QSFP+

The relationship between QSFP and QSFP+ is similar to SFP and SFP+; QSFP+ can support 10 Gbit/s data rates, but otherwise, the form factor is the same.

EMI is a very common problem

EMI is the enemy of all signal transmission systems, particularly high data rate systems. Potential EMI sources include improperly shielded connectors, which is why stacked connectors like SFP+ connectors are usually made of sheet metal.

The latch plate, which separates the upper ports from the lower ports and houses lightpipes from the PCB to the cage, was also identified as a source of EMI. Another component was added to the latch plate, without changing the way the latch plate functions, to prevent leakage. The result was a reduction in EMI in the 10-15GHz range.

System architects for networking and data centre applications need to be very familiar with the thermal requirements of their equipment. Since today’s SFP+ modules operate at higher wattages than SFP modules did, this must also be considered.

Most still operate under 1W, but this can be up to 1.5W for extended reach and fixed DWDM (dense wavelength division multiplexing) transceivers. Cooling these transceivers to stay below their (typical) 70°C operating point is a challenge when they are stacked very close together. Different configurations will affect the thermal properties of the interface; the number and density of ports is a key variable, as is the spacing between them, and other properties of the system such as ambient temperature and air flow.

Stacked connectors typically come with perforations in the sheet metal body to allow heat to escape and there may also be holes in the internal structure to allow for additional air flow.

There’s a new version of QSFP under development

A brand new form factor called micro QSFP will improve the port count by a third, compared to QSFP – 48 micro QSFP ports will fit in the space previously occupied by 36 QSFP ports. It’s aimed at switch platforms wanting to increase speed from QSFP’s 3.2 Tbit/s to 4.8 or 6.4 Tbit/s.

The main challenge for micro QSFP is how to deal with waste heat – it squeezes a 3.5W interface into the same width occupied by a 1.5W SFP interface. One idea is to add a heat sink to the modules with fins that help to distribute the heat.

Although heat sinks are used in QSFP, today they are part of the cage and inserting the module into the cage brings it into contact with the heat sink, making a less than perfect join between the module and the heat sink. Since this interface is so important, adding the heat sink to the module itself means it can be manufactured with a much better join so that heat can be radiated more efficiently.

Although micro QSFP is still under development, it looks promising.

Marco Enge is senior product manager Interconnect EMEA, Avnet Abacus and is responsible for product marketing and strategy, specialising in interconnect solutions. He has over 20 years experience in electronics marketing having begun his career with Siemens, and subsequently occupied roles with Vogt Electronic and Sun Microsystems before joining Avnet Abacus in 2006.

How 5G Will Change the World: 5G as a Disruptor

Did the power lunch really pack a punch?