The Palais des congrès de Paris played host to this year's European Microwave Week (EuMW) show and conference and Electropages went along to search out the top technologies. Here's what we found.

Test and Measurement specialist Keysight Technologies created a big splash at the show with its six millimeter-wave models that it has added to its family of FieldFox handheld analyzers. The flagship model is the industry’s first handheld combination analyzer to provide coverage to 50 GHz. 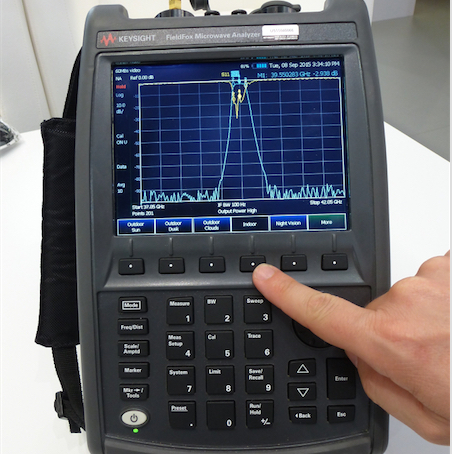 According to the company, FieldFox can replace three or four single-function instruments — bench top or handheld — that are typically used for maintenance and troubleshooting of systems that operate at or above Ka-band frequencies.

The FieldFox family is optimised for field-testing and the fully sealed enclosure is compliant with US MIL-PRF-28800F Class 2 standards and is also type tested to meet MIL-STD-810G requirements for operation in explosive environments.

Rohde & Schwarz showcased its test solution for the development and production of automotive radar sensors used in driver assistance systems. 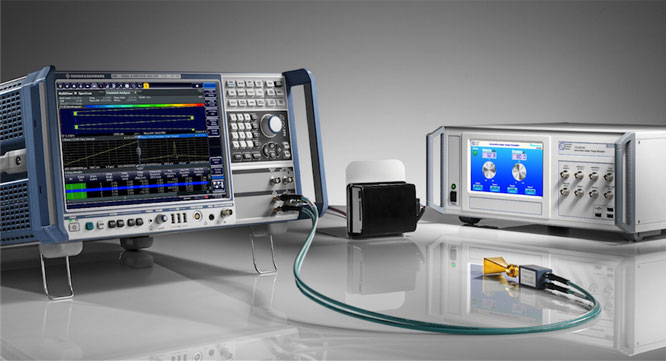 The turnkey ARTS radar target simulator now features an increased bandwidth of 1 GHz. As a result, it offers ideal characteristics for testing autonomous emergency braking systems or blind spot detection. The real-time interface for hardware-in-the-loop simulators can be used to play back real-world test scenarios in the lab in line with Euro NCAP standards. This reduces development costs and time to market.

An RF power transistor designed to deliver the benefits of solid-state RF power generation to a broad range of systems operating at 2.45 MHz was on show at the Freescale Semiconductor exhibition stand. Engineered to replace magnetrons and other vacuum tube-era technologies, the MRF7S24250N delivers precise control for manufacturers of products targeting industrial applications such as heating/drying, material welding, and plasma lighting systems, as well as medical applications used for skin treatment, bloodless surgery and cancer procedures.

The MRF7S24250N supports accurate power control over the full dynamic range, up to 250 W. The possibility to shift frequencies and phases opens the door to new use cases where RF energy can be directed only where needed. In addition, the transistor offers advantages inherent to solid-state equipment such as the potential to operate for hundreds of thousands of hours with no performance degradation over time.

National Instruments displayed its Wireless Test System (WTS), a solution that lowers the cost of high-volume wireless manufacturing test. Although faced with the rising complexity of wireless test, companies can cut test costs and multiply throughput on the production floor with a system optimized for measurement speed and parallel test. 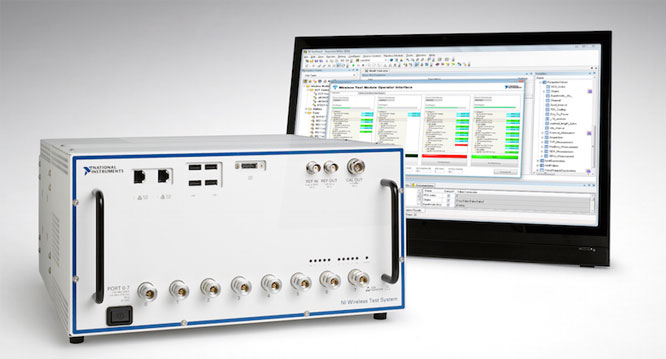 The WTS combines advances in PXI hardware to offer a single platform for multi-standard, multi- DUT and multi-port testing. When used with flexible test sequencing software, such as the TestStand Wireless Test Module, manufacturers can significantly improve instrument use when testing multiple devices in parallel. The WTS integrates into a manufacturing line with ready-to-run test sequences for devices that use chipsets from suppliers like Qualcomm and Broadcom as well as integrated DUT and remote automation control.

With support for wireless standards from LTE Advanced to 802.11ac to Bluetooth Low Energy, the WTS is designed for manufacturing test of WLAN access points, cellular handsets, infotainment systems and other multi-standard devices that include cellular, wireless connectivity and navigation standards.

Gallium Nitride exhibits typically form an important part of the EuMW experience and this year Diamond Microwave, a specialist in high performance microwave power amplifiers, had announced a ten-fold increase in its power output capability with the addition of a 1kW X-band model to the company’s range of GaN-based pulsed solid-state power amplifiers (SSPA).

The DM X1K0 01 is an ultra-compact SSPA operating over a 1200MHz bandwidth centred at 9.5GHz. The ultra-compact design measures only 244 x 134 x 50mm3 excluding heat sink and connectors, making it ideally suited for use as an alternative to a travelling wave tube amplifier in various radar applications. The Diamond Microwave amplifier range features designs that are flexible in layout and architecture, and are fully customisable to meet individual specifications for electrical, mechanical and environmental parameters.

And finally, was that really the Press Office for the show….. 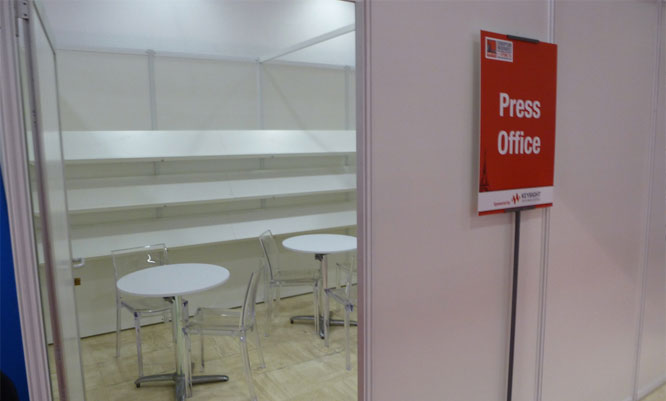 …Yes it was. Devoid of any exhibitor information or communication facilities or show personnel, even exhibiting company at the show NXP commented on just how were visiting journalist expected to quickly file stories back to their publications from the show. A good question, especially if companies had come to the show to launch and press release new technologies. And would sponsors of the Press Office, Keysight Technologies, have been happy with having its name outside this haven of tranquility?

The next generation of RFI shielding for EVADAS 5G IOT