The company offers the highest power density, with 60 kW in one 6U enclosure and 30 kW in a 4U enclosure. Markus Schyboll, CEO of EA Elektro-Automatik, comments: "With the new 60kW and 30kW industrial series instruments, EA Elektro-Automatik provides space-saving, cost-effective solutions with priority on both safety and the lowest cost of ownership. All our models have overcurrent, overvoltage, overpower, and overtemperature protection functions, and our new bidirectional power supplies and regenerative electronic loads have power factors of 0.99 and return up to 96% of absorbed power back to the grid."

Test engineers can parallel up to 64 of the 10000 series power supplies and loads utilising the Master and Auxiliary bus (formerly known as Master-Slave-Bus) to allow one instrument to control all devices in the system, which can be paralleled up to 3.84MW. The system can comprise any combination of instrument models within the series family. A galvanically isolated Share-Bus interface in each instrument provides that all the instruments safely share the load conditions so that no instruments in the system are overloaded.

All series instruments function on the same firmware and have similar input and output characteristics. The common programming and user interface saves test development and set up time when creating test and control systems needing multiple power instrumentation. 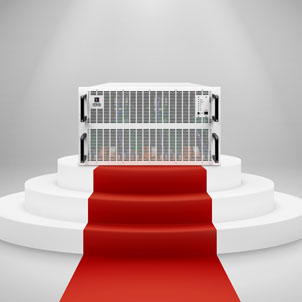