Innoscience Technology has released the Bi-GaN series of bi-directional GaN HEMT devices that save space and enable fast charging without suffering from reliability-limiting and possible dangerous rises in temperature that may sometimes be noticed in traditional silicon devices. It has also revealed that leading consumer electronics and mobile communications company, OPPO, uses the new BiGaN devices inside its phone handset to control the battery's charging and discharging currents. This is the first time such protection, based on GaN technology, has been incorporated in the phone itself – previously, the circuitry had to be included inside the charger.

Until recently, silicon MOSFETs have been employed as power switches in cell phones. However, these conventional devices not only occupy considerable space on a cell phone's main PCB, where every millimetre counts, but they could also result in significant temperature rises and power loss when fast charging. InnoGaN has advantageous characteristics, including high frequency, high efficiency, and low resistance, which are essential for efficient charging.

Thanks to InnoGaN's low RDS(on), the fact that it does not have parasitic diodes, together with the unique bidirectional feature of the company's BiGaN technology, one BiGaN HEMT can be employed to replace back-to-back connected NMOS MOSFETs in a common-source configuration to deliver bi-directional switching of the battery's charging and discharging currents. This lowers on-state resistance by 50%, chip size by 70%, and temperature rise by 40%.

The first BiGaN device generally released by the company is the INN040W0488, a 40V bi-directional GaN-on-silicon HEMT in the WLCSP package measuring 2.1mm x 2.1mm. The chip supports bi-directional switching with on-state resistance as low as 4.8mOhm. BiGaN is aimed at applications such as overvoltage protection circuits for smartphone charging, high-side load switching circuits, and switching circuits for multi-power systems. It is also working to extend the bidirectional family to lower on-state resistance and higher voltages.

Comments Yi Sun, Sr VP of product development at Innoscience: "The application of BiGaN products inside smartphones marks the arrival of a new era for GaN. We are delighted and indeed honoured that OPPO has announced it is using our innovative bi-directional HEMTs in their onboard fast-charging circuit. We look forward to further collaboration to deliver solutions that deliver advanced performance." 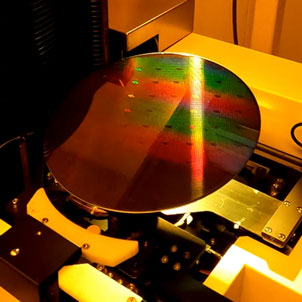