The new MOSFET satisfies the goal of battery designers for long battery life after a quick charge by lowering conduction loss. The core cell density of this new device has been increased by 30% when compared to the earlier version, while the design of the core cell, termination and source pads has been improved to lower the RDS(on) by 24%.

As a result, the conduction loss is greatly lowered while charging and discharging, and the overall efficiency of protecting battery circuits is enhanced. Also, this device features ESD protection to suppress abnormal voltages of more than 5V and withstand a maximum of 2kV of ESD for strong circuit protection. With these features, the 24V MOSFET can help prolong the service life of earphone batteries.

“Magnachip has developed this 24V MOSFET with outstanding performance after releasing three types of low-voltage MOSFETs that were designed to meet the rigorous demands of smartphone batteries,” said YJ Kim, CEO of Magnachip. “Once again, we have demonstrated technology leadership with this new product, and we look forward to expanding our family of products for battery-powered devices in the near future by introducing 24V MOSFETs for VR glasses and wearable devices.” 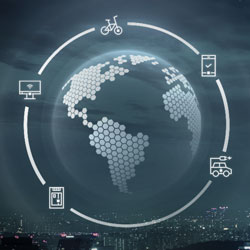