Providing wireless charging and communication functions with a single chipset

ROHM Group company LAPIS Technology has developed a chipset to provide up to 1W of wireless power for compact and streamlined wearable devices and industrial smart, miniaturised and sealed solutions. The ML7661 (transmitter) and ML7660 (receiver) remove the necessity for an external MCU by including a control circuit for transmission/reception, producing the industry's smallest system size in the 1W class. This makes it ideal for wearables with a large battery capacity intended to be worn for extended time frames. Typical products are wristband blood pressure monitors, smartwatches, fitness trackers, and hearing aids. Furthermore, the adoption of the high 13.56MHz frequency band allows the support for NFC.

There has been a expanding demand to improve the safety of compact electronics (especially small medical devices) against electric shock in recent years. Wireless power supply removes the need for a power cord, greatly improving safety during charging or sweating by increasing sealed housings' waterproof, dustproof, and (electric) shockproof performance. However, although the Qi standard is widely used and can supply up to 15W, the system size, including the chipset and antenna, is also typically large, making it challenging to incorporate into wearable devices.

The company developed the ML763x chipset that uses the 13.56MHz frequency band to provide 200mW of power and allow communication wirelessly. But while it was well-received by the market, there were requests for increased power to support wearables with large battery capacities like wristband blood pressure monitors, smartwatches, and hearing aids. Its latest chipset satisfies this demand by offering a power capacity up to 1W in a compact form factor, expanding the application range.

An evaluation kit is available that makes it simple to instantly begin evaluation of the new 13.56MHz wireless power supply chipset. 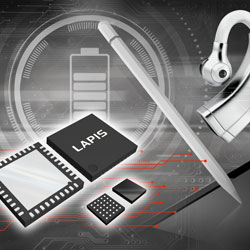