C&K has extended its toggle switch product family to incorporate an illuminated version. Offered in six different LED colour options, the ILT Series provides clear and distinct visual communication with users. The series saves valuable panel space by incorporating the illumination mechanism within the switch, rather than needing a separate indicator light. The series toggle switch does not need soldering, further simplifying installation.

Providing a reliable and long-term operation up to 10K cycles, the series toggle switch is rated to 20A.

“The new ILT Series toggle switches with LED indication makes it easy for users to confirm whether the switch is on or off from any distance,” said Troy Dixon-Sekaquaptewa, global product manager at C&K. “The illuminated toggle switch is suitable for a wide range of applications including those with higher amperage requirements.” 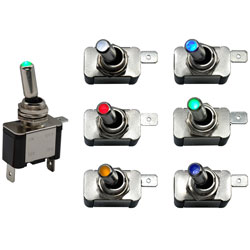 Performance USB A connectors that last