The newest addition to BVM Limited’s extensive portfolio of industrial grade Mini-ITX embedded SBCs is the very powerful and fully-featured LV-67W, which is based on Intel’s latest 8th Generation 14nm Coffee Lake H Series Core i7/i5/i3 processors in the FCBGA1440 socket. The i5 and i7 versions feature six-core processors, offering 12 threads for applications such as retail transaction terminals kiosks, digital signage, smart cities and healthcare where high-performance processing and graphics are needed. Based on the QM70 chipset, the processors provide higher CPU and graphics performance than the previous 7th generation with a TDP rating of just 45W. Up to 32GB of DDR4 memory can be fitted.

The integrated UHD Graphics supports three independent displays with 4k resolution each, and comes with hardware-based video encoding and decoding up to 4k. It has VGA, LVDS, DVI, HDMI and DisplayPort outputs to give advanced solutions for machine vision, infotainment, imaging, medical and gaming machines. 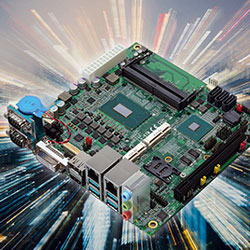