Keysight Technologies has announced the clock extension peripheral interface (CXPI) decoding and triggering options for its InfiniiVision 3000T and 4000 X-Series oscilloscopes. These are the only oscilloscopes available today that can decode and trigger on the CXPI bus. These new capabilities improve engineers' efficiency in debugging the physical layer of CXPI serial buses, which are used primarily in automotive applications.

CXPI is the next-generation, higher-performance serial bus protocol for automotive body control applications. Although the local interconnect network (LIN) is the primary bus used today for body control, it is often difficult to achieve sufficient performance and reliability in human machine interface (HMI) applications that require responsiveness. For this reason, the CXPI bus will eventually replace many of today's LIN bus applications. The CXPI protocol provides some features of the controller area network (CAN) protocol, such as non-destruction arbitration, as well as extension error detection and recovery, implemented on a UART-based data link. 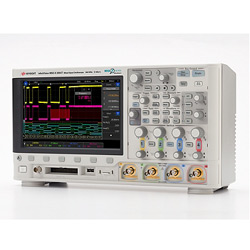