From 31 March 2018, all new car models are required to be equipped with eCall technology that will automatically communicate with the 112-based emergency response service in the event of a road accident. Technology and expertise from Stadium United Wireless, a leader in the design and manufacture of machine-to-machine wireless technology, has helped TRL (the Transport Research Laboratory) to develop proposed technical requirements and test procedures for the type-approval of eCall in-vehicle systems. Stadium United Wireless provided TRL, an independent transport research, consultancy and organisation, with telematics units and technical support in order to develop an appropriate set of test procedures for the eCall systems. The technology and support from Stadium formed an integral part in the development of proposed test procedures, which were developed and put forward by TRL to the European Commission (EC) in preparation of the mandatory European roll-out of eCall systems in 2018. As part of the project TRL developed draft requirements and test procedures for seven technical aspects which include Resistance of eCall systems to severe crashes (sled test), Full Scale impact test, Crash resistance of audio equipment, Co-existence of third party services (TPS), Automatic triggering mechanism, In-vehicle system self-test, and privacy and data protection. Technical expertise and a dozen telematics units provided by Stadium were used for experiments in the dedicated deceleration sled test element, and operability verification test procedures which set out to measure the mechanical resistance of eCall systems to severe crashes at accelerations up to 100 g. The samples were designed, produced and provided by Stadium United Wireless and included the telematics control module (ECU), containing the printed circuit board with GSM and GNSS modules, SIM card holder and SIM card, capacitors and other electronic components. The test programme was designed and carried out by TRL using its in-house high-energy test sled facility, which uses a bungee propulsion system and deceleration elements to achieve severe deceleration levels. A physical and electronic inspection, via current consumption and GPS/GSM functionality, was carried out by Stadium United Wireless at the end of the tests which concluded that all 12 samples remained undamaged, even after being subjected to a deceleration of over 100g. Chris Harrison, Head of R&D, Stadium United Wireless, commented: "We were approached by TRL to participate in this important project due to our experience and expertise in developing wireless M2M solutions as we already work with a number of global OEMs in the automotive sector and in the design and manufacture of telematics products from our TS16949 approved sites in the UK and China." "We worked with the technical team at TRL to develop and carry out specific crash-based testing which tested the resilience and reliability of our range of telematics ECUs. The inspection results showed that all system designs under test, although not specifically crash-hardened, survived even the highest-severity deceleration. This demonstrates that the required level of deceleration-resistance for an ECU, including a dedicated battery, can be achieved by applying good and diligent system design practice, as recommended by our technical team, without applying overly burdensome crash-hardening methods to the units." "Working with TRL on this project was a fantastic opportunity for us to test our own units in high-impact crash scenarios. We are hopeful that the findings included in TRL's proposal will go on to inform the guidelines and safety regulations set out by the European Commission for eCall systems as they have the potential to save thousands of lives through wireless technology." Matthias Seidl, vehicle-safety researcher, TRL, added: "Our in-house test sled allows us to simulate collisions with peak decelerations considerably higher than most current vehicle tests. These high levels are necessary to ensure that eCall systems are still able to make an emergency call, even after a severe crash. The samples Stadium provided and its specific expertise in the design of these telematics systems helped us develop stringent but practical test procedures for eCall systems that can ensure that poor system designs, which could jeopardise the safety of road users, will not be allowed onto the European market". "The results can also be used to help shape the technical discussions at an international level in order to ensure that the same level of protection is provided to road users around the world. In fact, the suggested European standards have also been proposed to the United Nations working group on automatic emergency call systems." The eCall Regulation (Regulation (EU) 2015/758) empowers the European Commission (EC) to adopt delegated acts defining 'the detailed technical requirements and tests for the EC type-approval of vehicles in respect of their 112-based eCall in-vehicle systems and the EC type-approval of 112-based eCall in-vehicle systems, components and separate technical units' and delegated and implementing acts regarding privacy and data protection. The TRL report, entitled 'eCall Phase 2 - Technical requirements and test procedures for the type-approval of in-vehicle systems', can be downloaded free of charge from the European Commission website, says the company. 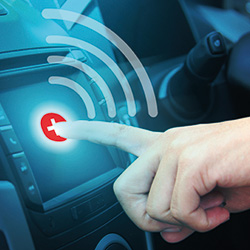